She grew up on the 'old frontier' world, Theta VII, on her parents' hydroponic farm estate. 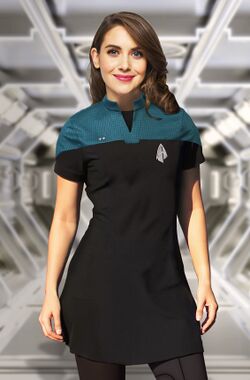 Like many from Theta VII, Robin grew up with a fondness for the bold retro aesthetic of the 2260s - still relatively popular on the "old frontier" world which was founded during that time of bold exploration and equally bold fashion. As such, many of her off-duty outfits reflect the unique fashion sense of the 2260's. Below are a selection of outfits she keeps on file in her replicator catalogue for various occasions... 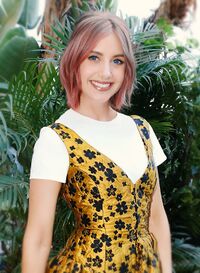 Growing up on the “old frontier” world of Theta VII, Robin always felt like she had ‘the best of both worlds’ in her reach. New discoveries were still being made and visitors from exciting new civilizations still traveled through the ports of Theta with regularity – yet, as an established colony, they also boasted the developed infrastructure, technology, and resources that characterized life in The Federation.

Robin’s parents, a Human FDC representative and a Centauran terraforming consultant, had met on Velestus (Alpha Centauri IV), but opted to settle down on Theta VII - a world that neither of them called ‘home’, where they felt they could make a fresh start. There, they took over the management of a state-of-the-art hydroponic farming estate from its retiree owners.

This environment fostered Robin’s interest in Science from a young age – though she never dreamt of joining Starfleet or becoming a career scientist. Throughout her youth, Robin was certain she would become an artist. Her love of art and media (including modern holostories as well as vintage films and books) led her to undertaking an internship with Encrer Livre – an Earth-based publishing company – in her late teens.

It was during this internship that she first discovered her interest in holo-programming (and realized she had a knack for it). Exploring further, she quickly discovered an unexpected love for programming and computer science – finding the near-endless creative possibilities and practicability of the skill exciting. As she neared the end of her schooling, Robin realized she wanted to better understand the underlying principles that advanced computing and hologram technology were built on.

To continue her studies, following her newly-developed interest in STEM subjects, Robin traveled to Earth for better educational prospects. While she found being far from home challenging for the first year, she quickly grew to appreciate the opportunities that studying - and living - on Earth afforded. She completed her undergraduate studies at UC Berkeley, then went on to complete her masters in Physics.

After six years studying physics in California, it was hard to ignore the call of Starfleet. She applied for the Academy on a whim, submitting an application to complete her PhD studies that she never expected to be accepted. Much to her surprise, she was accepted. As a Starfleet Cadet, she earned her doctorate in four years and was able to further expand her knowledge of programming through a few elective Engineering courses. This time at the Academy also allowed her to round out her Scientific knowledge, attaining a wider set of skills that would make her a formidable Science Officer upon graduation.

As a result of her exceptional studies, Robin graduated Starfleet Academy with the rank of Lieutenant Junior Grade. 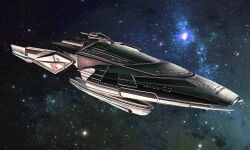 Robin’s first posting was aboard the Oracle Class USS Wall Street under the command of Captain Sh'Torn. There, she learned quickly, amidst a crew of dedicated scientific minds. Her genial personality and enthusiasm earned her a spot on the ship’s coveted ‘day shift’ where she would be able to work closely with the vessel’s Chief Science Officer, Trisha Montgomery. Under Montgomery’s tutelage, it wasn’t long before Robin achieved the rank of Lieutenant and took on a role as a Computer Science Specialist.

When news of Amity Outpost’s establishment in the Delta Quadrant reached Robin’s ears, she felt immediately drawn to the distant and exciting deep space station. Already used to an extended mission far from home, the prospect of traveling months away from Federation space seemed totally worth it in exchange for an opportunity to work in such an advanced and resourced Science and Research Center – not to mention the chance to meet denizens of the Delta Quadrant.

Excited at the prospect, and with Chief Science Officer Montgomery’s recommendation on her file, Robin requested a transfer to Amity Outpost in early 2399. 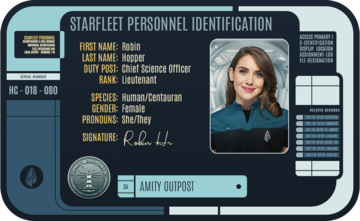 As Robin is a new character, she hasn't earned any awards yet!

Player Achievements & Awards can be found on Keegan's User Page.