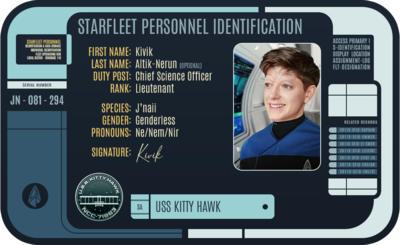 Kivik was posted to the USS Veritas in 2398. Ne came aboard during shore leave, via shuttle, and met with Captain Rahman and the ship's Operation's Officer, Lieutenant Commander Parker[8] - who welcomed Kivik aboard and assigned nir quarters. During the briefing, Kivik was also assigned to the Endeavour Five mission - an archeological away mission aboard the shuttlecraft Baikal to find the remnants of a lost NX-Era shuttle (the Endeavour Five) and its crew.

During the mission, Kivik began to learn more about nir crewmates - spending time working one-on-one with Ensign Reade and attending an evening 'around the campfire' hosted by Lieutenant Wong. Ne particularly connected with Ensign Thorne, as the two of them had been assigned to share a room. The pair stayed up late one night eating Thorne's homemade apple pie and discussing their unique histories[11].

The mission ended abruptly, and earlier than expected. Unbeknownst to the Veritas' team, an unfamiliar race of energy beings (who called themselves Kerenians) lived on the Moon they were investigating and had tried to possess the crew of the Endeavour Five. When the Baikal arrived in orbit of the moon, the mission quickly went sideways as Captain Rahman found herself possessed by some other spirit and compelled to destroy the crashed vessel from orbit[12].

Unknown to the crew, one of the energy being entities managed to 'stowaway' on the Baikal and would turn up later as an invasive entity in one of the ship's Holodecks. The intruder attempted to trap several crewmembers, including Kivik, within the Holodeck and kill them - perhaps as a ploy to lure and possess the Captain[13]. This plan was foiled by the trapped crewmembers and their valiant shipmates and the intruder was destroyed.

For nir participation in the Endeavour Five Mission, Kivik was awarded the Scientific Discovery Ribbon by Captain Rahman on 239809.20[14].

During the mission, there was a minor earthquake that collapsed part of the Russel River Dilithium Mine, trapping nearly 100 miners, as well as Ensign Scotty Reade and Lieutenant JG Ikaia Wong within. Kivik was designated to the Search and Rescue (SAR) Team under the command of Chief Engineer, Commander Wil Ukinix. In a joint operation with Antor II's Emergency Response Division, the SAR team managed to rescue most of the miners as well as the two Starfleet Officers[15].

For nir participation in the Antor II Mission, Kivik was awarded the Innovation Ribbon (for participating in the multidisciplinary MST modification project) as well as the Joint Meritorious Unit Award (for working in tandem with the local SAR team) by Captain Rahman on 239809.20[16].

En route to the Delta Quadrant aboard the USS Thor, Kivik was fortunate to meet some of nir colleagues - including Ambassador Rivi Vataix, whom ne attended a spa day with (along with Ikaia Wong)[17].

Aboard the Outpost, Kivik was quartered with nir friend and colleague from the USS Veritas, Scotty Reade. The two of them enjoyed living together and purchased some custom furniture from Lorqui Kansatsu-sha's shop - including a custom-made table with a USS Veritas centerpiece[18].

During nir first few days aboard the station, Kivik came down with an unexpected case of Levodian Flu. Reporting to Sickbay with unusual thoughts and behaviour, CMO Ikaia Wong and Dr. Falina Suribana quickly realized that swelling in the J'naii's sinuses was putting pressure on nir brain and affecting nir ability to think and communicate clearly. Once the initial symptoms wore off, the medical professionals were able to synthesize a vaccine for the flu which they dubbed, 'Kivik's Strain'[19].

Kivik would later meet Rebecca Iko early in the young Security Officer's time aboard Amity. Together, they attended the Festival held in honour of the station's new posting[20].

Shortly before their first mission, Kivik met with Wil Ukinix over drinks to discuss nir first impressions of the Commander and share some rumours ne had heard. The two agreed to both put in some time researching each others' backgrounds and the lands they came from[21].

During nir time posted on Amity Outpost, Kivik participated in the following missions:

In 2399, Kivik was asked to take on the role of Acting Chief Science Officer in Zhanyt Lafizatar's absence by nir former Captain, Roshanara Rahman - now Captain of the USS Kitty Hawk. Accepting the position eagerly, Kivik quickly began to realize that ne wanted to serve under Rahman aboard the Kitty Hawk more permanently. A few months later, ne requested consideration for the role and received an immediate field promotion from Rahman to the rank of Lieutenant, along with the posting of Chief Science Officer.

During nir time posted on the USS Kitty Hawk, Kivik participated in the following missions: 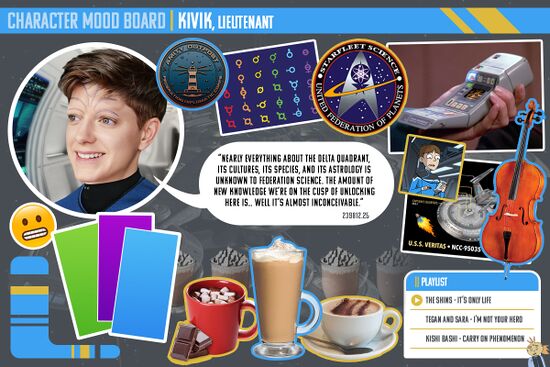 A 'Mood Board' with Kivik's preferred colours, instrument, and other elements that represent nir history, interests, and personality.
Retrieved from "https://wiki.starbase118.net/wiki/index.php?title=Kivik&oldid=339147"
Categories: