The USS Wall Street is a Oracle class starship launched in 2390. It is currently under the command of Captain Sh'Torn, an Andorian. It is named after the famous Earth street in which a lot one of the old nation states wealth was exchanged in. The Wall Street isn't currently stationed in one particular place due to it's current ongoing mission. It is a large science vessel holding 500 officers, most of which are science officers. The Wall Street also serves a second purpose of transporting diplomats to and from federation planets on which they serve. it does this while still performing its primary mission of science. 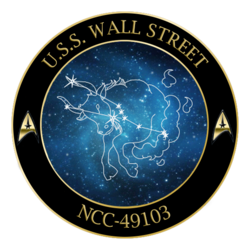