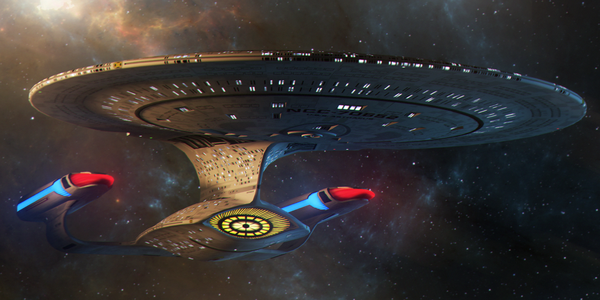 The USS Astraeus is one of the first six Galaxy class explorers commissioned in the 2360s, alongside vessels such as the USS Enterprise-D and the USS Galaxy. During her first decades of service, the Astraeus conducted several long term exploration missions at the edge of Federation space and beyond.

Besides her exploration missions, the Astraeus also served with distinction during the Dominion war, in which she maintained a high success to failure ratio against Dominion vessels. Crippled during the Battle of Ricktor Prime, she spent the rest of the war in drydock undergoing repairs before she and Starfleet were able to resume their mission of peace and exploration.

Commanded by several different Captains and with dozens of first contacts under her belt, the Astraeus' advancing age and diminished effectiveness had begun to show near the end of the 2380s, and she was was pulled off of active duty several years ago for an extensive refit and overhaul, initially supervised by then-Lieutenant Commander Mei'konda at Starbase 74. With these modernizations eventually completed, the Astraeus was recommissioned, and assigned to the command of the recently promoted Captain Mei’konda Delano.

She embarked on a several year exploration mission to the far away Eagle Nebula where she made first contact with several new and distant species. Eventually, the Astraeus returned to Federation space for resupplies, refit, and crew rotation.

Captain Delano was reassigned to the USS Chin'toka, which he commanded for two years until she was crippled in the process of saving the Lanaxa system from the passage of a rogue neutron star. With the Chin’toka due to be in drydock for over a year, and given the Akira class starship’s scientific and medical limitations, Mei’konda requested and was granted command of the Astraeus once again, and she was assigned to the Par’tha Expanse.

After the withdrawal of the Andaris Task Force, Starfleet’s presence was reduced significantly in the region, until the crew of the Chin’toka, through significant diplomatic efforts, managed to sign a treaty with the Par'tha Expanse Noble Houses, granting them a star system in which to establish the first permanent Federation colony in the Expanse. This colony, now quickly establishing itself as a hub for trade and diplomacy, is called Shemsh.

The Astraeus' primary mission is the security of the Federation presence in the Expanse, with a heavy emphasis on solving problems through diplomacy and the facilitation of trade, scientific discovery, and humanitarian aid missions. With the constant conflicting interests between the Par’tha Expanse Noble Houses, the Freeworlds Region, and the need for defense against the aggressive, expansionist Valcarian Imperial Republic, the fact that this modernized Galaxy class starship has some of the best mobile scientific and medical facilities in the quadrant mean that she is a highly valuable asset in the Expanse. And in the case of aggression, her enhanced tactical systems mean that she is well prepared to defend herself.