Arthur Summerside is a Briori Human reporter born in the Delta Quadrant. He currently works as a provocative independent journalist aboard Amity Outpost. Summerside is a PNPC simmed by Keegan (Kivik).

Arthur, called 'Arty' by the few people who are actually fond of him, is a Human born on Briori - a world originally belonging to a race of empirical alien overlords who brought captive Humans from 1930's Earth to serve as slave labor. Hundreds of years after they overthrew their masters, the Humans now call themselves Briori and control a small sector of space around their planet.

When Arthur was a boy, the planet was visited by The Voyagers (USS Voyager). Since then, there has been a radical shift in Briori society - with some embracing their rediscovered Earthly heritage and the awakening of The 37s and others terrified of the encroaching Federation and the loss of Briori's unique culture. Arthur considers himself neutral on this issue.

Regardless, this discovery revealed an insatiable hunger for knowledge in Arthur, who took quite naturally to journalism. His long-time friend, Joe Lewiston, and he would end up working for the Briori Sun news outlet - Joe later becoming the Editor in Chief. Lewiston, however, is staunchly anti-Federation. Following a rift between the two men, Arthur has since declared himself independent.

Arthur may come across to some as old-fashioned, particularly in matters related to journalistic integrity or manners (hearkening back to the revival of 1930's culture on Briori). All the same, many find him oddly charming. He is often accompanied by his Talaxian friend and holo-photographer, Pix.

As soon as she heard the word “reporter”, Keehani gave a knowing smile. She could sense natural inquisitiveness in the man, his stated career explained why.

Keehani: I *am* First Secretary Ukinix. ::playful squint of eyes:: Should I be concerned that you’ve looked up the Diplomatic Corp’s personnel list? ::Slight smile:: Do you have an something to report on?

Summerside: Nothing nefarious, I promise. Just here to see what all the hubbub is about - the new station, a triumphant return to the Delta Quadrant, and all this… ::He gestured around with the martini in his hand:: togetherness. ::Taking a drink:: Inspiring.

Arthur: You want to know my resolution, Pix?

The softspoken Talaxian nodded his agreement while sipping on one of the ubiquitous blue thingies.

Arthur: Success. I’m done with failure. I’ve got to change if I’m going to survive in these shark-filled waters. Success, Pix, whatever the cost - even if it’s my past… or my dignity.

- Continuing to Evolve and Iterate

Vataix: Anything you think we're missing?

Summerside: Would it be nettlesome of me to suggest ‘grit’?

Arthur enjoyed the expression on Ambassador Vataix’ face for a moment. She had a way of making surprise look like… enticed curiosity.

Vataix: "Grit?" Perhaps you can expound upon that?

Vataix: True, part of our mission here is to showcase the worlds of the Federation to the Delta Quadrant... but I do want to see Amity become a true mecca of cultural exchange--which means incorporating more Delta Quadrant species here. What do you suggest?

Summerside: Well I wouldn’t go so far as Hirogen Holo-Hunting, but if you want my advice – I’d start going local. Show some commitment to embracing the D.Q. as it is.

Arthur leaned back against the railing, watching Vataix muse the idea.

Summerside: How much of the Quadrant have you really seen, Ambassador? ::Raised brows:: It’s a big place. 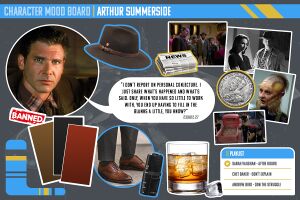 A 'Mood Board' featuring elements that represent Arthur's history, interests, and personality.

Below are a selection of music tracks that convey elements of Arthur's personality, storylines, and moods.