Ensign Ychol is a Vulcan Counselir-In-Training serving aboard Amity Outpost under the direction of Lt. Commander John Carter. He is currently studying the validity of an unconventional approach to counseling - applying Vulcan Logic precepts to the practice. Ychol is a PNPC simmed by Keegan (Kivik). 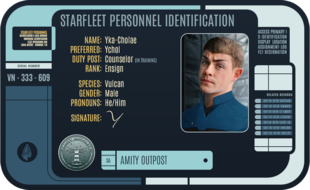 It is Ychol’s logic-based determination that the healing benefits of logical thinking may prove beneficial to members of many Federation member species and Starfleet officers. After completing his time at the Starfleet Academy, Ychol received his placement aboard Amity Outpost as a member of Starfleet Medical.

“Many negative thoughts and feelings, while rooted in reality, are illogical and maladaptive reactions. My role as a counselor is to provide patients with tools to better understand their underlying maladaptations and, through logic, control their overwhelming emotions.”