David Flint is a Reserve Helm Officer currently serving aboard Amity Outpost and was formerly part of the Borg Collective for nearly ten years. His complete Borg designation was Nine of Twenty, Quaternary Adjunct of Unimatrix 03. Flint is a PNPC simmed by Keegan (Kivik). 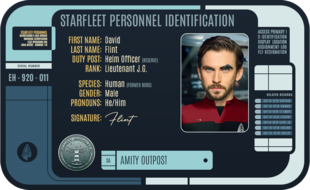 Fresh out of Starfleet Academy, where he had spent four years as a promising young cadet eager to get behind the helm of any and every starship, David was assigned to the USS Nimitz in 2387. Not long after, the ship was attacked by a Borg Cube and the entire ship and crew were lost. David, among many of his crewmates, was assimilated into the Borg Collective.

Nearly a decade later, that Borg Cube was recovered for study and dubbed The Artifact. A project was undertaken to liberate many of the drones and return them to a more ‘normal’ life. David was among the first to undergo the process, as his human physiology presented minimal complications, and his association with Starfleet made his recovery additionally ‘interesting’ to the project’s overseers.

Following his liberation, David underwent significant physical and psychological therapy to recover what he could of his former identity. In order to escape the memories of his time amongst the Borg, David did his best to embrace his former life and threw himself back into Starfleet – proving that he was still a capable and passionate pilot.

This dedication to service earned him the chance to return to the pilots’ chair, despite a pervading mistrust of xBs among the general population. However, it was decided that his posting might be best suited outside of Federation space. As such, David has been posted to Amity Outpost as a junior Helm Officer.