Nathan Richards is an Engineering Officer on the Amity Outpost.

Bio: "Born and raised in Big Fork, Montana, Jennifer is part of a long line of "Park Rangers" responsible for the upkeep and protection of the Glacier National Forest. She was always considered one of the 'popular crowd' growing up, with her friendly and bubbly personality. Her parents passed when she was fairly young, leaving her with the responsibility of watching over the National Park. One day while doing work and chores around her home near the entrance to the park, a fire started that nearly took her life and destroyed everything left to her by her parents, were it not for one brave fire fighter."

Bio: "Born and Raised in San Francisco, California, Patrick grew up in a family full of Starfleet Officers. There was of course the pressure for him to go into Starfleet as well, but he didn't envision a life among the stars like the rest of his family. His dream started at a young age, watching old movies about Fire Fighters. After graduating from high school, Patrick set out to find somewhere he could fulfill his dream. His travels landed him in Wyoming, working as a fire fighter for what remained of the Yellowstone National Park. While on a short vacation up into Montana with some of his friends, Patrick saved the life of a young woman whose house caught on fire just inside the Glacier National Park. A woman who he would one day marry."

Bio: "The second oldest of the Richards Children, Blake spend most of his free time reading books in his special hiding place within the forest of the National park. After Graduating from high school, Blake attended two years of University to become a Lawyer, but changed his mind, dropping out and returning home to work inside the park full time."

Bio: "Hunter is the youngest living Richards Family member, having just graduated High School. He has agreed with his parents to spend a year with the family and the park before he heads off to Starfleet Academy to become a medical officer."

Bio: "Samantha, like Blake, spent most of her time reading and studying the forest. She went straight to University after graduating high school, diving deep into Planetary Science with plans to join her brothers in Starfleet once she gains her Masters."

Bio: "Alexis was a free spirited and adventurous child. She looked up to Nathan in everything that he did, wanting to grow up and e just like him."

Nathan has always been a bit of a free spirit. A people pleaser. Going out of his way to make sure those he cared about were happy and taken care of.

With an almost overwhelmingly positive personality, and a sometimes dark sense of humor, Nathan has never seemed to have an issue getting along with anyone he has come across. 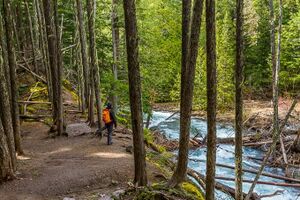 238611.22: Severely Wounded in Animal Attack, resulting in one fatality.

239509.11: Enlisted into Starfleet, hoping to make the galaxy a better place.

Nathan was born in Bigfork, Montana to Jennifer and Patrick Richards. The Richards family had taken on the duty of maintaining and protecting what remained of the Glacier National Park over the past 150 years. Spending lots of time in the National Park, Nathan developed exceptional survival skills and discovered his love for engineering while working on the autonomous park equipment and containment facilities. After many years, Nathan decided he wanted to be part of something more than just another ‘park ranger,’ as they used to be called, and enlisted into starfleet.