From 118Wiki
(Redirected from Victory)
Jump to navigation Jump to search

First launched in 2379, the USS Victory took her name from a long line of proud vessels bearing that name. Launched under the command of Captain Jordan Hurne, the Intrepid Class starship has become on the longest living ships in the fleet of Starbase 118.

The vessel was not assigned to a set area or sector, but was used as a rapid response across the galaxy in areas where she was needed. She remained under the command of Captain Hurne until his mysterious disapearance in 2383.

Captain Robin Phoenix was a starfleet officer that had the Victory as their first assignment and was able to rise to the position of Captain on her decks. Though Commander Megan Parker took stewardship of the vessel, she only remained in command until 2382. Commander Parker assumed command of the USS Aurora leaving to Captain Phoenix, who assumed command in 2383. After two more years in active service, the USS Victory was placed in to drydock at Starbase 118 after her captain was deemed medically unfit to command. 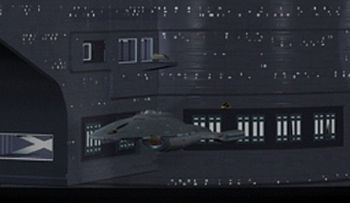 Until 2385, the Victory only received an upgrade to her phasers and had her photon torpedoes upgraded to pulse fire quantum. She sat in drydock until she was re-assigned to Commander Andrus Jaxx. For another year, the spunky intrepid class vessel stayed out in space, but in the end, she was pulled in to the sphere of influence of Starbase 118 Ops, when freshly promoted Captain Jaxx assumed command of the Trojan-II classs starbase. There she would remain for six years weathering many battles and incidents with the starbase's crew.

Free of the Starbase

In June of 2391, another Ensign who grew up on the deck of the USS Victory was promoted and assumed commander of her. Captain Nugra was given to her in part of a top secret assignment. Upon his success, he was left in command and assigned to the Tempest Sector under the direction of Outpost Echo. 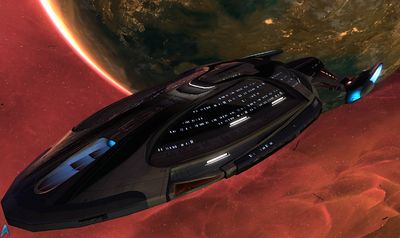 Since the refit of 2385, the Intrepid class starship only received a boost to her weapons replacing the five photon torpedoes tubes with five burst fire quantum torpedoes. Though this gave the ship an edge in exploration and missions in the last part of the 2380s, it was only temporary. Star Fleet Corp of Engineers proposed a retro-fit where the Intrepid would be receive upgrades to the rest of her systems instead of weapons. The main idea being to upgrade the already existing intrepid class starships in all of Starfleet in the most economical way without having to create and test a brand new class to fit its mission profile.

With the creation of new hallmarks in Starfleet technology like the Vesta class and the Quantum Slip Stream Device, the engineers assigned to the re-design wanted to incorporate as much of that as possible in to the upgrade.

After the USS Victory's test run of her new technology on stardate 239207.15, the vessel was deemed unready once returning to Starbase 118. The vessel has been impounded for further refits and testing before she was allowed to leave dock again.

After extensive repairs were conducted, the USS Victory was re-certified as space worthy an assigned to Task Force Hope in the Raytas sector. Captain Temperance Harland was placed in command.