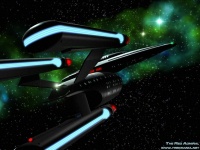 The USS Wellington is a Niagara class vessel, which was under the command of Captain Phillip Harback in 2383. That year, the Wellington attempted to assist the USS Steadfast-A, which had been disabled by an energy field in the Lovinon system. The Wellington was itself disabled upon arrival.

The Wellington has been assigned within the Ithassa Region since the end of the Gorn conflict of 2383. In April 2385, under the command of Captain Kellner, she was assigned to investigate the disappearance of the USS Ronin. She stumbled across a Ferengi shuttle that had attempted to 'salavage' the mostly-abandoned Ronin, parked in orbit around the desert planet Rakis. After helping to recover the Ronin's crew and escape pods, she towed the ship back to Deep Space 17.

In the fall of that year, after the Ronin's return to the Ithassa region, Captain Robert Morgan was assigned to be the CO of the Wellingon.