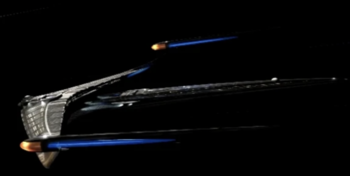 The USS Nashira (NCC-101395) is an Altair class light frigate of the Federation Starfleet.

The Nashira is one of the first ships in the Altair class. Although the USS Altair was launched in 2371, the Dominion War pushed back the development of light frigates like the Altair in favor of more heavily armed ships. By the time the engineering order came in for eight ships of the class in the mid-2390s the Altair herself was over twenty years old. Nevertheless, as a unusually tough smaller ship with nearly all of the functionality of larger cruisers, the Altair class has found its niche. The Nashira was commissioned in 2397.

Among the benefits of the Altair class include its handling in atmosphere. With its small size, lean frame, small cross-section, and airfoil shape, Altair class ships can easily enter planetary atmospheres and set down on planets’ surfaces themselves. This represents an upgrade to the landing and atmospheric maneuverability of classes like the Intrepid. The Altair class is also designed to function with a smaller crew overall.

The Nashira is a new ship, and it feels like it. It’s given up the spartan feel of earlier ships of its size (the Saber class, for example, or going back even further to the Miranda), and is designed to function with more automation and a smaller crew. The smaller crew enjoys more room around the ship and a variety of spaces and supports not available on older ship types.

The Nashira was launched under the command of Commodore Ossa V'Airu in 2398. Its shakedown cruise saw it facing off in a mock mission against the USS Thor in the role of a pirate raider.