The USS Braveheart is a medical ship, which can be called upon for any major medical crisis, or evacuation. Under the command of Commander Jan T'Yai the Braveheart performs medical studies, research, and missions of mercy in the Beta Quadrant. The ship is assigned to the StarBase 118 fleet. 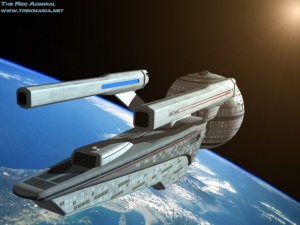 As the Olympic-class is equipped only with defensive tactical systems, an escort is usually required when leaving Federation space.

On Stardate 238503.05, Fleet Captain Rocar Drawoh gave temporary command of the USS Braveheart to Dr. Julia Harden to mount a Search and Rescue Mission on the planet SQ313.

On Stardate 238807.01, StarBase 118 was rocked by explosions. The station lost primary power and had mass casualties. Sickbay not having power, Dr. Eliaan Deron requested permission to transport the casualties to the USS Braveheart, which was nearby. The Base XO granted permission and sent Lt. Commander Allen Diaz to take temporary command of her bridge begin transporting patients to the Medical Wards. Starbase Second Officer, and long time friend of Dr. Deron, Lt. Commander Guy Hunt died in sickbay after being transported to the Braveheart for treatment.