The USS Ackerman was a Constitution class vessel commissioned in the year 2248 with the registry number NCC-1744. From its commissioning until 2253, the Ackerman was under the command of Captain Sovar of Vulcan. For the remainder of its active service, the Ackerman was commanded by Captain Duncan Glennie. 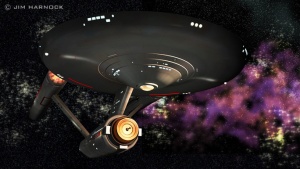 In 2269, Captain Glennie reported a distress call received from a civilian freighter in distress and that he was taking the Ackerman in to assist. The freighter called Zuiyo Maru had become stuck in an unidentified spatial anomaly. In the course of freeing the freighter, the Ackerman itself was engufled in the anomaly and vanished. Search and rescue missions failed to turn up any trace of the vessel and at the end of the year, the Ackerman was listed as lost and its crew was officially declared dead.

In 2379, one hundred and ten years after it vanished, the USS Ackerman reappeared from what has since been determined to be a temporal, rather than spatial, anomaly. Unfortunately, the temporal effects wrought havoc upon the Ackerman's crew, agining them at three times the normal rate. By the time the Ackerman re-emerged from the anomaly, its crew was nothing more than a collection of husks.

Despite the vessel seeming to be a ghost ship, closer inspection of the Ackerman's systems revealed that three patterns were locked in the transporter system. According to the Captain's log, a party of three had been beamed over to the Zuiyo Maru and, presumably, were in the process of beaming back when the Ackerman was lost. Through the dilligent work of Starfleet engineers, the transportation process that had begun over a century ago was successfully completed and the three survivors of the Ackerman incident were brought into the 24th Century.

The USS Ackerman was decommissioned immediately upon its return to Spacedock in 2379. A segment of its bridge has been preserved in the Starfleet Museum in San Francisco as an example of the early Constitution Class interiors.