Dehner Base is a scientific institute commissioned by the Federation Science Council and led by Professor Olivia Sellards. Manned by some of the keenest intellects from across the United Federation of Planets, its mandate is study the effects of the Galactic Barrier on the Sagittarius Reach as well as to assist the USS Columbia in their overall mission to explore this previously uncharted region of space. 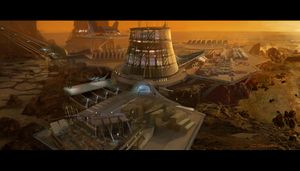 Located on Delta Vega I, it is the first manned Federation presence on the world although there is an unmanned lithium cracking station previously owned by the Galactic Mining Corporation that has been unused and abandoned since the middle of the 23rd century. Construction began in January 2395 and was overseen by the Starfleet Corps of Engineers and phase 1 of construction was completed by September 2395 when Professor Sellards and a small contingent of her peers arrived to begin operations.

As Starfleet’s mission progresses within the Reach there are plans to further construction to allow the institute’s scientific investigations to expand to include more disciplines. Additionally phase 2 also includes an offsite effort to modernise the aforementioned lithium cracking station to include dilithium mining efforts. Phase 2 is expected to take a further 12 solar months.

Given the institute’s location on a strategically important world within the Sagittarius Reach (in terms of the Federation mission in the region), Starfleet Command took the unusual step of placing defensive weapons and measures including a shield grid and planetary defense cannons to repel any unwanted attention. These measures have been met with disdain by the civilian scientists- especially Professor Sellards- who view them as needlessly hostile.