The USS Challenger was an Akira class vessel that served valiantly for many years until stardate 238603.03, when in a battle with the Nevenians, the ship was self-destructed to prevent it from falling into hostile hands. The crew was rescued, weary and battle-scarred, and returned to Deep Space 24. The surviving crew was reassigned to the USS Challenger-A. 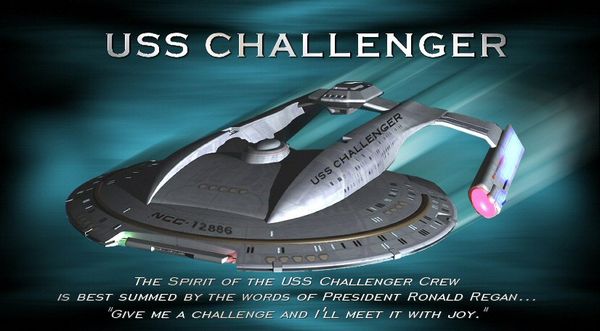 Millions of eyes watched the skies the morning the NASA shuttle Challenger, with its seven person crew, lifted off to begin a new era in exploration through education. Its demise 73 seconds after liftoff characterizes not only a loss of life but a loss of a dream for a brighter future.

That vision for a brighter future continues 397 years to the day of that tragic loss, with the commissioning of the Akira class starship USS Challenger. Her mission will be to inspire, to teach and to learn as her crew honors those who have come before them and seeks to bring new possibilities to those who come after.

The Challenger's capabilities far exceed its battle-hardened exterior, with a crew of individuals who aspire to uphold the values of Starfleet and their desire to "see what's out there". The Borg, the Dominion, the Romulans...all are entities the crew has faced before and may confront again - they will rely on their memories of the past to help guide them as the future unfolds before them.