Prometheus class heavy cruisers are an onset of combat support Fleet vessels, designed primarily in response to technologically advanced threats facing the Federations. Developed from a combination of the technologies of Defiant, Sovereign and Intrepid classes, the Prometheus utilizes the latest in ablative armour, warp field technology, and quantum weaponry. It is the only ship class which is capable of separating into three sections (upper engineering hull, lower engineering hull, and the saucer section) coordinated through its multi-vector assault mode.

While the USS Independence-A was designed as a tactical assault cruiser, it served a much wider role and performed deep space exploration and diplomatic/military roles, utilizing the full advancements of its science, medical, and engineering facilities.

The fifth Prometheus class starship of the 118 Fleet, the Independence-A was built at Utopia Planitia before being dispatched to the Ithassa Region under the command Rear Admiral Jessa Anassasi after the loss of its predecessor, the USS Independence during the Gorn Conflict of 2383. It would continue to serve the Fleet until November of 2388, when the ship was believed destroyed in an alternate universe while Fleet Captain Sidney Riley was commanding.

It was later discovered the USS Independence-A wasn't destroyed, but left floating dead in space, ghosting through parallel universes via a phenomenon known as a space lightning storm. The ship was declared officially lost, and its successor ship, the USS Independence-B, was commissioned in 2398. 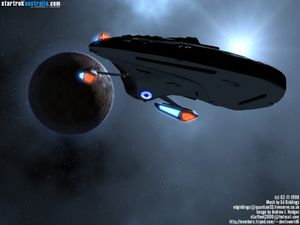