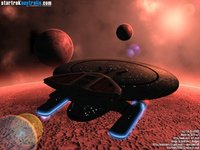 The near-famous Nebula Class USS Ranger was commissioned in the beginning of September 2373 following the promotion of Cmdr. Brian Kelly to Captain after serving under FltCapt. Elinor of Kanist on the USS Centris. Its maiden voyage saw the Ranger and the Centris on a joint mission back into the Gamma Quadrant from the Centris’ prior mission, just prior to the outbreak of the Yolanda Wars.

Through the course of the war and shortly after, the Ranger’s life was short lived, despite housing some of the Fleet’s finest. In March of 2374, Commodore Kelly was believed to have been killed in service of the SEALS on a mission in Sector 73.

The Ranger bared the misfortune of coming into contact with a Crystalline Entity. Captain Jeff Pelletier, commanding the USS Freedom-A, arrived in time to enact swift measures sending in a repair detail while the Ranger was engulfed inside the crystalline entity to move the Ranger crew onto the Freedom-A when the Ranger imploded, taking lives on both ships.

Both the Ranger and the crystalline entity were destroyed. Its remaining crew joined the Freedom-A.