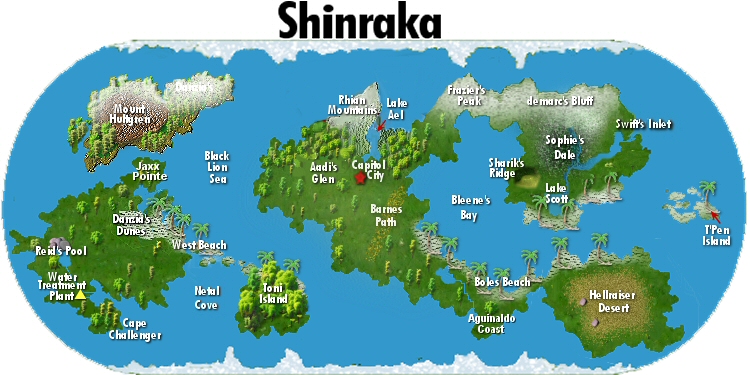 Deep Space 24 has been re-located here and now orbits around the planet. As well the Federation has established a colony on this planet for the Dabh'aelisu (A.K.A. "The Dark"), a new species that evolved from the Romulans.

Original planetary survey was conducted by the Klingons. Prior to the settlement of the colony a civilian research team from the Federation conducted another planetary survey to confirm the findings of the original survey and ensure that the planet was viable for colonization.

Data from both surveys shows abundant plant life. A complex eco-system with animals, fish, birds, reptiles and insects. Also plenty of industrial, heavy and light metals. Some gems and crystals but for the most part sub-standard with few practical uses. Some rare metals but not in high enough quantity or quality to make them practical at this time. No radioactives detected.

Deep Space 24 is a Federation station in geo-synchronous orbit above the planets surface at a height of 32,000 km. (20,000 miles) It maintains it's location above the equator just south of Capitol City.

In 2043 the Klingons fought a battle with the Romulans near the system holding the planet that would become Shinraka. Shortly after this in 2044 the Klingons did a survey of the planet to determine if it would make a good military base. The survey was done, filed and forgotten.

In 2302 the Federation discovered Shinraka. This was done by a renowned Vulcan astrophysicist, named Arbesta. It was his theory that Shinraka had been part of a larger planet within the regions of Romulan space.

By 2317 Arbesta was able to convince the Federation council and the Vulcan Science Academy to mount an expedition to study this world. After extensive testing, it was determined that it’s mineral and metal deposit ratios closely paralleled those of Remus. Arbesta speculated that eons ago, a supernova caused part of a much larger Remus to break away, and was blown out into space.

In 2324 Vulcan archaeologist Scak led an expedition to the planet, with the hope of finding evidence of ancient Romulans. The exposition met with success, finding the remnants of ruins indicating that Shinraka had indeed once been home to an ancient Romulan outpost in the 16th Century, and by mid 17th Century had a significant Romulan presence. What happened to those early inhabitants is unknown.

It was one of 10 planets selected by the Federation as possible locations to establish a colony for the Dabh'aelisu. Known formally the "Dark", the Dabh'aelisu were a new species that had evolved from the Romulan with telepathic abilities. They had been forced to flee from Romulan controled space and had requested sanctuary within the Federation.

In 2383 a civilian research vessel returned to Shinraka with copies of the original Klingon planetary survey as well as the reports from the 2 earlier expeditions. They very quickly determined that the planet was suitable to colonization and left.

In 2384 after much consideration and debate the Federation agreed to allow the Dabh'aelisu to start a colony on Shinraka.

No one is sure when they started to evolve but the "Dark" (Dabh'aelisu) are an evolved genetic offshoot of the Romulan race. This genetic alteration has resulted in a an evolved state of enlightenment that has resulted in the development of a higher level of perception, telepathy and in rare cases other mental abilities which their Romulan counterparts do not accept or condone. Due to these telepathic abilities they have been outlawed by the Romulan government.

Because of this they have had to hide their existence from the rest of Romulan society. This resulted in the development of an underground society hidden with in the complex and extremely ridgid structure that the Romulan people and government had developed.

Few records are available to the Federation but it is believed that they have been hunted and terminated when ever they were discovered for more than 300 years. The earliest data known that seems to confirm this is of a state ordered execution of a whole family of cursed mind leeches in 2019.

Finally in 2381 the Romulan government was able to use advanced scientific scanners to detect and uncover the identity of anyone even faintly showing the altered genetic protein marker that identified all members of the Dabh'aelisu.

The Tal Shiar hunted them like they were the plague. Scanning any and everyone everywhere. Arresting any and all persons who showed the altered genetic protein marker that identified them as being members of the "Dark".

This might have been the end of the Dabh'aelisu except that in 2379 a Romulan by the name of Sharik went to Earth where he was educated. When he returned to Romulus the death hunts were just starting. He wanted to help his people escape from the persecution of the Romulans and Tal-Shiar. As a result he started to organize them and teach them the values and beliefs that he had learned within the Federation. In the process he became their leader.

Sharik assembled the few remaining Dabh'aelisu in the Capitol to make their escape on a Romulan Scout Ship, the D'haraza. Among the handful of Dabh'aelisu with Sharik were Ael Khellian (female) and Rhian D'Heyahh (male). Both are of important lineage and in their mid twenties, both of them Dabh'aelisu who had to hide their telepathic abilities or be killed. After meeting each other, they fell in love and embraced their heritage, and were destined to become the parents of the first pure Dabh'aelisu, Terrh D'Heyahh, the beginning of the Dabh'aelisu race.

The Dabh'aelisu populace on the scout ship claimed sanctuary within Federation Space and were placed under the protection of the USS Challenger and the USS Thunder who escorted the scout vessel to Federation space.

Following this amazing escape a large number of Dabh'aelisu were able to steal other vessels and make their escape to Federation space as well. This massive exoduse had been planned by Sharik and was carried out by a large number of his followers. The vessels they used were for the most part old, relics that had seen better days. However the shuttles and small cargo carriers that made up the majority of this fleet were able to successful make the trip to freedom.

Besides the scout craft one other Romulan military vessel was used. It was a decommissioned frigate class troop transport that was salvaged from the military graveyard in the Volu'inu system. It was used to make another dareing escape, freeing over 4,000 prisoners from the prison colony on Zeta Pictoris III before makeing the mad dash to freedom.

While this was occureing the Federation council was debateing about what to do with the Dabh'aelisu. Finally they agreed to offer them sanctuary and selected 10 possible locations for them to form colonies. This list had both occupied and unoccupied worlds on it. At the last minute one of the 10 was changed to Shinraka. Reason unknown.

In 2384 after much consideration and debate the Federation agreed to allow the Dabh'aelisu to start a colony on Shinraka.

The planet has a diverse set of environments with 2 polar ice caps, a large desert, a number of large mountain ranges and a significant amount of dense jungle. In fact the jungle covers a majority of the land mass.

Temperatures tend to be on the warm side with the air being muggy. Very little exersise results in most people sweating a lot.

They have a fairly diverse eco-system with birds, fish, insects and animals.

The main predator is the Raka lizard of which their seems to be a number of different breeds. They all have a few things in common. These are a bite that causes paralasis due to a toxic chemical in their saliva. A brain that is so small that they seem to operate strictly on instinct. They also seem to be fearless as they will attack anything they think they can eat. They all have razer sharp claws that allow them to climb just about any surface as well as 6 legs and 6 toes on each foot. Last of all is a body coloring that in most cases allows them to blend into their environment.

They have very few exports which are for the most part raw ore and other simplistic items such as exotic fruits. They still import a large amount of products. They have finally developed sufficient food production facilities to support the entire population and supply the station in orbit as well. This includes the production of luxury foods that would not normally have been produced.

They have no large production facilities. Almost all of their efforts so far are small employing less than a hundred people each.

A rough estimate calculated to determine how long it will take for them to repay the financial loans made to them by the Federation seem to indicate that at their present level of development it will take them about 32 years.

So far only the one city named Capitol city has been built. All the efforts of the colonists have been put into establishing a complete infrastructure so that they can become self sufficient sooner.

It is believed that almost every single Dabh'aelisu still alive has been able to escape from with in the Romulan Empire. As a result when the colony was founded over 23,000 Dabh'aelisu were transported to the remote planet. During and after it's construction a large number of individuals of other races either worked on the massive construction projects and then stayed to set down roots or immigrated to Shinraka in hopes of a better, brighter future.