USS Achilles (NX-82376), briefly named NX Nemesis from 2381 to 2383, is a Federation starship and the lead ship of her class. She was named for the ancient Greek hero of Homer's epic poem the Iliad.

USS Achilles was laid down on Stardate 237310.3 at the Procyon Fleetyards, launched stardate 237412.21, sponsored by Leticia Apollodorus, daughter of the governor of Greece, with Captain Morghan O'Riley in command.

Due to the Romulan hijacking of USS Prometheus the previous year, Achilles was moved under heavy escort from Procyon to the Utopia Planitia Fleetyards orbiting Sol IV (Mars), where the rest of her systems, including the THETIS AI control system, were installed. 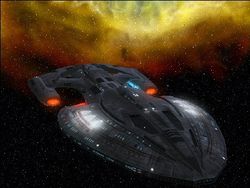 Her combat outfitting complete, Achilles deployed to the front on Stardate 237504.04, construction crews still aboard fitting out some of her systems. Arriving at Starbase 372, Achilles was immediately assigned to the command of Thomas Riker and given a long-range unescorted strike mission, the target being the Ketracel White production facilities in the Pelosa system. Despite heavy resistance from defending Cardassian and Dominion forces, she made a successful single pass on the facility, destroying the complex with its high output quantum torpedo launchers. In addition to the facility, the Achilles destroyed a full wing of fighters and four Dominion attack ships, while crippling at least as many. This was a single-mission ship kill record that stood for the rest of the war.

While extremely successful during the war and finished out shortly afterward, problems between her commanding officers and the THETIS system, however, resulted in the most advanced ship in Starfleet having 5 COs within a year after the war, then being drydocked, unused, at the Utopia Planitia yards for nearly six more.

New threats, in the form of the Romulan Empire, pushed Starfleet Command to find a new commander for Achilles and Fleet Captain Adler Wong-Aquiss was assigned to the ship. After being told that she was being recommissioned, the onboard AI hacked the computers that controlled the moorings at Utopia Planitia and took the ship out for a short trip, leaving her new CO to arrive at the shipyards to find no ship of which to take command. The ship was tracked by long-range sensor arrays making a blazingly fast triangle to Wolf 359, then Procyon, before returning to Mars.

At the request of the Fleet-Captain Wong-Aquiss, Achilles was renamed Nemesis, honoring a long line of ships with that name. The onboard AI was less than thrilled with this name change but was forced to go along with it nonetheless.

The first mission of the ship was successful, evacuating a colony before the planet tore itself apart from internal seismic pressure. The second mission was to stop a defecting Starfleet Admiral from reaching Romulan space; Nemesis was intercepted and presumed destroyed by 5 Norexean-class Warbirds. She managed to destroy two Romulan ships and crippled two others, reportedly badly enough that at least one of them was scrapped rather than being repaired.

Reports of the ship's demise were, to quote Mark Twain, "greatly exaggerated." The ship reappeared in the Ithassa region, operating under her original name Achilles, and played a role in precipitating the Gorn invasion of that region in 2383.

After the conflict, Starfleet decided it was time to track down Achilles and bring her back into the fold. Commander Walker and the USS Ronin were assigned to that task. After a tense encounter involving the summary destruction of three Grendellai ships and the spacing of their boarding parties from the Ronin by the AI, the ship returned willingly to Deep Space 17 and its newly expanded facilities for repairs and refitting.