The USS Albion benefits from a rich heritage, yet is the only vessel to be named Albion since the 21st Century. A versatile vessel, it benefits from the tried and true Excelsior Class design but has had sufficient refits to make it suitable for service in today's fleet. 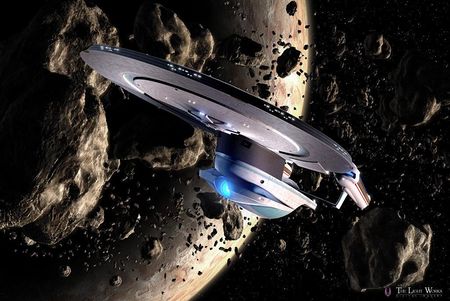 The ship was designated to Commander, then Captain Michael Rourke after the closing of Black Tower/Intel, with Lt. Commander Mike Weller as his first officer. It's speculated that the USS Albion may have served SB118 Intelligence for a time after its launching in 238006.29. However, it returned to full active duty after a complete refit to serve as the main support vessel for Starbase118 Operations. After her mission under the command of Commander Sal Taybrim to track down the USS Stormcrow and her Captain Haz Arrhimen, the ship took a very large beating. The Albion lost more than 18% of her Stardrive and 12% of the Saucer Section of the ship when she was rammed by the Stormcrow. A hull breach opened up in Main Engineering behind the warpcore exposing the section to space. Force Fields sealed the area off before if pulled the Matter/Antimatter injector apart.

The Albion was towed back the Star Base 118 by a Galaxy Class Starship. She was then dry docked and a repair and refit schedule was made.

The Albion returned to active duty on 239306.17, and served StarBase 118 Ops for three more important missions where she finally met her end fighting a battle against the Romulan Warbird IRW Sienov which had been commandeered by Orion syndicate criminals. She was destroyed on 239309.15 while protecting peace throughout the trinity sector. Her crew escaped and was offered aid by the IKS S'Tarahk.

Upon return all reports said the USS Albion went down in honor and bravery, a fine ship to the very end.

Registrar Notes: At the behest of the Starbase 118 Operations Command team, the name 'Albion' will be placed into the registry pool for A-Suffix reallocation.