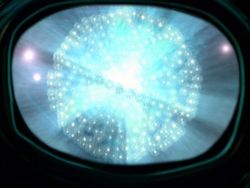 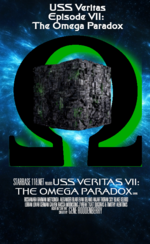 Ensign German Galven was requested per Acting Captain Evan Delano to report to him in the Briefing Room. During a brief meeting, Lt Cmdr Delano and Ensign Galven went to Engineering because security had captured a Borg drone trying to hack into a conduit. Although, the drone was unsuccessful because of a weak connection to The Collective. Lt Cmdr Delano and Ensign Galven tried to talk with the drone, who's designated number was Three of Ten, and through Galven's modified headset, he was able to get through to her mind.

Lt Cmdr Delano had to go to the Bridge to deal with the rest of the crew in order to get back to the present. Before he went, he made sure to order Ensign Galven to disconnect the drone from The Collective. His PADD picked up that neither Three of Ten or The Collective were responding as medical officers Ensign J'vreh and Lt Cmdr Dassa Alexander came to provide medical attention to the drone once she was back to full consciousness as a human female. Ensign Galven deactivated the drone using a virus to sever the connection to the Collective's Hive Mind. 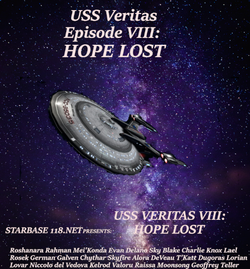 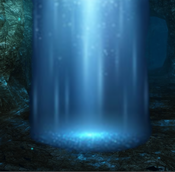 Captain Roshanara Rahman receives orders to help the colonists at Havley's Hope search for a group of missing miners. She informs all the senior officers to report to the briefing room. Due to the amount of ground to cover, there are three teams assigned. Commander Mei'konda's team would go and speak with general manager Starit Proz about the disappearances. Lieutenant Commander Lael Rosek's team would be investigating the disappearance site, and Team 3 led by Commander Evan Delano's team would be looking into the questioning of witnesses, investigating homes and so forth.

While Lt. Commander Rosek's team is investigating the last known locations of the missing miners, they get attacked by the creatures and are kidnapped. Ensign German Galven is injured by a mine collapse while saving Lt. Commander Rosek. With some group effort, German survives his wounds. Ensign Valoru attacks a guard while Rosek is away dealing with negotiations with the Queen. His efforts prove worthwhile as he manages to grab a phaser rife from the unconscious guard.

When the Queen finds out what Valoru did, she orders her guards to go get him. While he's away, Ensign Galven, Doctor Skyfire, Lt. Commander Moonsong, and Crewman Shandres figure out a way to get a signal back to the ship by using the doctor's EARS device. When Rosek and Valoru are taken back, a much-needed signal boost is added by modifying the phaser rifle and it is successful.

After Lt. Commander Rosek's team is safely back on board the ship, Captain Rahman decides to make contact with Tk'Ton, a forager and makes 2 teams. One that stays aboard the ship while her team goes to the surface and have peace talks with the newly discovered species. After some tense negotiations, she is successful and Tk'Ton goes and speaks with her own.

While on the Bridge, Mei'konda and his team search for any type of information regarding the what was taking place under the surface of the planet all the while keeping a watchful eye over Rahman's teams meeting with the species. They found a thoron field under Proz's facility that had several life forms. It was found out that Proz was keeping Orion women as services for him and his men. He was arrested for sentient trafficking among other things to be determined.

Enemy of My Enemy

The crew received word that there was a life-threatening plague sweeping through the planet Meridian. An intergalactic barter and trade system that was going to affect the rest of the known quadrants. Starfleet sent Dr. Solok to help with efforts and before they had approached Meridian, the senior crew held a meeting in the Briefing Room. After much deliberation, they decided to transform both shuttlebays into quarantine wards.

After the Montreal landed on Meridian, Commander Mei'konda, Lieutenant Dr. Femi Cattan, Lieutenant JGs Kawakame Shin and Jacob Harkrow went out to city hall for a meeting with two Klingons. A General Eth'ek and Colonel Rilaw to discuss how the crew could help with a cure for the plague that at the time only affected Klingons and hybrids. During the meeting, the General had been infected and collapsed. Colonel Rilaw was furious, making it look like it was the Starfleeters that caused his sickness and demanded they take him as well as her back to the ship.

Once back on the ship, the medical and science teams began working on patients and calming the Colonel down. A few moments later, Lt. German Galven fell ill and collapsed after the team discovered he had a rupture in his suit. With Dr. Solok and Ensign Stennin still working on a cure, there was not much to do for the Denobulan and CMO Chythar Skyfire came to the decision to place him in a medically induced coma much to the Trill nurse Beelam Grog's displeasure. She reacted in such a way that her previous host made her believe that German was her dead wife.

On the Bridge, First Officer Lael Rosek had been dealing with ships trying to leave the planet as well as ordering Commander Tal Tel-ar and Ensign Tiria Hamasaki to disable anyone trying to escape.

After a few moments, Commander Rosek received an incoming hail from a cloaked ship. After a brief, heated, conversation that revealed Colonel Rilaw had poisoned German. Then another person appeared on the main viewscreen who was Lenik. A Vulcan terrorist that had poisoned the water supply. Ensign Sotak, a transfer from the USS Atlantis arrived shortly after and helped the bridge crew along with the CO to devise a plan to abruptly lift off and send a very welcoming gift to the terrorists. A shuttlecraft timed to explode with an overloaded warp core. Doctors Solok, Skyfire, and ensign Stennin find a cure to combat the virus while Dr. Cattan and a crewman save German from a heart attack while the virus slowed his organs.

After a lengthy chase, the USS Montreal and her crew finally arrived to the planet in search of Lenik, a Vulcan extremist, and quickly learn that his whereabouts were somewhere in the Karakka system. As soon as the Norway Class Starship arrived, they were met with rigged weather surveillance satellites that had concealed antimatter bombs. Commander Tal Tel-ar was quick enough to spot the first and fired upon it with the ship’s defense system as he alerted the crew to brace for impact. Only a handful of officers suffered minor injuries as they proceeded towards Sickbay and had their injuries were treated by Doctor Solok, the chief medical officer, and a new medical doctor who replaced Beelam Grog after last month’s departure. An Elaysian named Ensign Sheila Bailey was quick to adjust to her new surroundings despite her species physiology dealing with the adjusted gravity who has to wear an exoskeleton and walk on crutches.

After a brief discussion between Lieutenant Commander Lael Rosek and Commander Mei'konda, it was advised that an away team be sent down to a deserted area where the remains of Lenik’s ship had crashed. The away team included Lieutenants Riley Delar, Kawakame Shin, and Stennin, Ensign Miko Sirk, and Crewmen Astrim Dito and Muvyn Padix. Once they got together in the Shuttlebay and after a rocky flight dodging large Federation freighters with the expert skills of the First Officer at the helm, they landed on the planet.

Meanwhile, aboard the Montreal, persons in Sickbay and Engineering were noticing something rather strange as a form of disgusting slim started to seep within the ship’s floors and walls. Much to Ensign Bailey’s dismay, she fell on the slippery surface while Lieutenant Jacob Harkrow and Ensign Sotak went to investigate where it was coming from. They managed to find the source of the problem in a Jeffries tube where they found a sentient life form that was seeking medical help. The blobbery slime creature quickly darted away as Lieutenant German Galven came sliding through and determined it wasn’t a threat.

As the bridge crew was trying to set up sensors to determine where Lenik was hiding, the away team was startled to learn that Lt. Commander Lael Rosek was kidnapped by Colonel Rilaw, a co-conspirator of the Vulcan extremist. Soon after Lenik and Rilaw made themselves known and the Montreal intercepted them which they were now on a hijacked freighter, German was doing his best to remain calm on the bridge and work the sensors to determine where the First Officer was. Lenik had given an hour ultimatum to Commander Mei'konda before that if they weren't able to give him what he wants, he would attack the Federation starship.

As German saw Lael's life signs grow weaker when she was alone with Lenik, he asked Mei'konda if he could somehow get Rilaw to turn against the Vulcan extremist by trying to talk with her. After a brief discussion the communications were cut and then the crew waited as the remaining crew on the away team came back aboard the ship.

Soon after the crew was trying to determine why their shields were malfunctioning, apparently Lenik saw it as well and fired upon the Montreal. With nothing left to do and Lenik now boarding the starship with his crew, Mei'konda was given no other choice, but to abandon the ship and set the auto-destruct to 10 minutes. With Lenik now on board and a team sent to go find him that had gone to engineering, the entire crew went to evacuate in their own separate ways.

With Lieutenants Riley and Shin now in the area that Lenik was in, they quickly found out that he was trying to download Federation data to the Romulans and with minutes to spare started a firefight which caused a fire as well as Shin finally able to kill the extremist by Borq's D'k tahg. Seconds after they were beamed aboard the Alliance that was being manned by Lieutenant Harkrow while Galven, Mei'konda, and a few others were beamed to a nearby Klingon ship with twenty seconds to go.