Commander Evan Delano is a 33 year old Vulcan/Terran currently serving as the commanding officer of the USS Diligent.

Evan's life has largely been defined by his struggle to find balance between his Vulcan and human halves, and this struggle has led to occasional emotional turbulence in his life. Of note, Evan pleaded guilty of assault, conduct unbecoming of an officer, and illegally using a Vulcan mind meld against an unarmed prisoner during a court martial in 2392. Evan was nearly expelled from Starfleet, but extenuating circumstances, and a previously sterling record ultimately led to clemency. Although Evan tried to return to duty following this incident, he eventually asked for his Starfleet commission to be officially suspended. Several months later, he accepted an assignment from Federation Security to infiltrate, observe, and report on the Reya-Laialara, a Vulcan splinter group, from their hidden settlement.

During his time with the enigmatic group, Evan found himself drawn to the organization's philosophy of emotion balanced by logic, and soon developed conflicting loyalties. When Captain Rosa Carrero was murdered and her death linked to the Reya-Laialara, Evan returned to the public eye to help find her killer. As a result, Evan joined the crew of the USS Veritas as a civilian advisor. Several months later, he reactivated his Starfleet commission and fully joined the crew. First, as operations officer, then as first officer. In 2397, Evan was made the acting commanding officer of the USS Diligent to oversee completion of the prototype of a new class of starship. The ship was later damaged during a rare solar flare event and Evan's assignment to the Diligent project was made permanent. In mid 2398, the Diligent Project changed following the official launch of the first four Diligent-class starships. A new officer was selected to continue oversee building of new ships, but Evan himself was assigned as the permanent commanding officer of the Diligent.

During Evan's time in Starfleet, he has also served on various vessels taking part in the Menthar Corridor expedition, including USS Garuda and USS Invicta. He also served on the USS Tiger-A.

Evan is relatively tall by Vulcan and human standards, and has an athletic, broad-shouldered build honed over a lifetime of martial arts training and a continuing interest in other physically demanding recreational activities. He keeps his dark brown hair cut close to his scalp, but the widow's peak he inherited from his mother is still slightly visible. Like most Vulcanoids, he has pointed ears.

Quarters: USS Diligent, 02-A (Captain's Quarters)
Religion/Spiritual Devotion: Agnostic Atheist.
Hobbies and Pastimes: martial arts, orbital skydiving, climbing, general fitness, games and puzzles
Likes: Keeping busy, clear goals, bettering himself and others, the satisfaction of working towards a solution
Dislikes: Inactivity, navigating ambiguities, unsolvable problems, failure
Ambitions and Goals: Evan joined Starfleet to be an explorer, but these days, his main interest in helping to better the lives of the people of the Shoals. In his free time, he has been continuing to his explore the traits of his Vulcan half, and some of this has bled through to the way he conducts himself around the crew.
Achievements in Life: Evan's proudest achievements are his graduation from Starfleet Academy, and his marriage to his husband.
Disappointments in Life: Evan considers his greatest failure to be the moment he gave in to emotion and telepathically attacked Harrison Ross, a prisoner he had been interrogating. Even now, he still struggles to control his emotions, and therefore has a hard time connecting with others simply because he doesn't trust himself as much as he should.
Temperament: Eager, active, direct, curious, inquisitive, passionate, occasionally obsessive (especially when presented with a problem to solve)
Mental problems (complexes and phobias): Evan suffers from a version of Pa'nar Syndrome that appears to be in remission.

Evan's parents met at a civilian engineering conference in New Berlin on Luna in 2365. Their meeting extended into a short-lived affair which ended when Evan's father, Kedall, confessed that he was married. Ashamed at what he saw as an "emotional outburst," Kedall returned to Vulcan and broke off all contact with Evan's mother. During his early years, Evan had a troubled childhood in which he struggled to control his erratic, sometimes violent emotions. He resented his stepfather and refused to accept his surname when he married his mother. Though Evan and his stepfather have since reconciled their differences, he continues to use his mother's maiden name. Evan's inability to control his emotions eventually got him into trouble after he severely injured another classmate after a minor disagreement.

Evan was to be admitted to a juvenile rehabilitation center until Kedall intervened and offered to take him to Vulcan to be properly trained to control his emotions. Temporarily placed in the guardianship of his biological father, Evan lived on Vulcan for five years. Though he struggled to fit in just as he had on Earth, Evan learned to control his emotions through the use of basic Vulcan meditation exercises combined with his devotion to learning Suus Mahna, a defensive Martial Art.

After returning to Earth, he achieved academic success, though he still struggled to connect with many of his peers. At the urging of a teacher, a former starfleet officer, Evan applied for and was eventually accepted into Starfleet Academy. 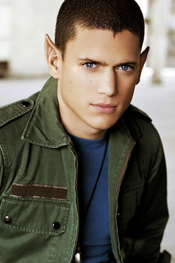 Evan entered the Academy as an engineering major in imitation of his civilian parents. He struggled to adapt to the rigorous academic requirements of the school and nearly washed out. The mentorship of Commander Tarla Dean gave him the tools he needed to recover, and at her urging, Evan transferred to the Security Department. He had to work harder than most to succeed, but excelled in combat and tactics training. He spent a considerable amount of his free time with the Academy's mixed martial arts club, which he used to fulfill his athletic participation requirement. Evan spent almost a full year on a cadet cruise aboard the USS Centaur where he was eventually promoted to Acting Chief of Security. He was briefly transferred to the Starbase 118 Academy campus to complete training aboard the holographic USS Centris-A. After graduating, he was commissioned to the USS Tiger-A as a security officer.

During the Iconian Gateway crisis of 2390, Evan received a field promotion to Lieutenant (JG) and a new assignment as the chief of security. Evan was injured during an away mission and, upon his return to the Tiger, was forced to take medical leave for several weeks. By the time he'd been deemed fit to return to duty, Tiger was on route to receive a major refit. Evan was given a temporary reassignment to the USS Garuda following a recent refit. The Galaxy Class ship's tactical systems had recently undergone significant improvements, and Evan's combined experience in both Operations and Security made him an ideal candidate for the assignment. Evan only learned that his assignment was being made permanent when most of the crew of the USS Mercury was transferred to the Garuda.

Aboard the Garuda, Evan held a variety of posts, first as a helm officer, then as the assistant chief of security/tactical, and most recently as the head of the ship's small strategic operations department. Evan was assigned to the Chief of Security/Tactical position in 2391. In mid-2392, Evan was transferred to the USS Invicta along with all of the Garuda's senior staff, though Evan was relieved of duty shortly thereafter due to misconduct during a prisoner interrogation. Following a court martial, Evan was demoted to the rank of Lieutenant and sentenced to two years of bond, pending good behavior. Relieved of his duties as a department chief, Evan was assigned to serve as the ship's tactical operations officer. Shortly thereafter, Evan requested an indefinite leave of absence.

During this time, Evan was approached by Federation Security, who asked him to increase his contact with the Reya-Laialara with the ultimate goal of allowing him to join the enigmatic organization and report back on any suspicious activity. Evan accepted the assignment, and took the opportunity to join the organization at the end of 2392. Over the next few months, Evan sent back several reports before ultimately breaking off contact. He was quietly declared Missing in Action shortly thereafter. In 2394, the USS Veritas was dispatched to the Shadow's with orders to find and determine Delano's relationship to the assassination of a Starfleet captain.

Evan was cleared of wrong-doing, and joined the crew of the USS Veritas as a civilian advisor. As time passed, He made the decision to return to active duty as a starfleet officer. In that capacity, he once again gained the trust of his colleagues, and eventually became first officer of the Veritas, then leader of the Diligent Project.