Crewman Tasnim "Taz" Shandres is the 22-year-old Kriosian/Betazoid daughter of Ki and Roshanara Shandres in an alternate universe where the Federation lost the Dominion War. After becoming stranded in the prime universe in 2392 by herself, she lived briefly with the prime-Roshanara Rahman aboard the USS Invicta before moving to Esperance with her father's prime counterpart. She later enlisted in Starfleet in 2394 and served aboard the USS Veritas before being assigned to the USS Endurance in 2398. 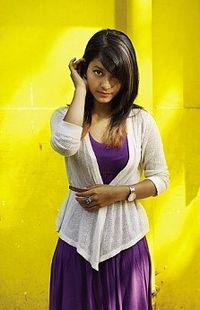 After Veritas was inactivated to undergo an extensive refit in 2398, she was assigned to the USS Endurance.

Since before joining Starfleet, Taz has enjoyed making silly videos for FedNet, a hobby she began as a teenager aboard the USS Invicta. Posting prank videos she had made that featured her boss chief engineer Geoffrey Teller aboard the USS Veritas gradually increased her viewership.

In 2399, Taz made a series of short videos by Taz called "We are Starfleet" that paired the organization's famous recruitment slogan with contrasting clips of crewmen aboard the USS Endurance in humorous and often mundane work situations. The series subsequently went viral. While Starfleet Command found it mostly harmless and perhaps even useful to boost the organization's struggling recruitment numbers, her department head aboard the Endurance ordered her to refrain from filming any more videos without clearance from him and the Endurance command staff.