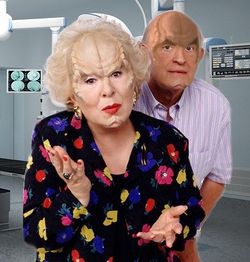 German Dane Galven V was born on 236404.17 and lived for a short few months on his home planet of Denobula. His father, German Dane Galven IV, was a Denobulan Military Scientist and moved his family to San Diego, California, Earth to expand his findings and teach humans more about the Denobulan way of life. German's mother is a Quantum Physicist. Aza Galven worked all the time and was unable to bear more children after German was born. Because of her high demanding job, his parents decided it'd be best if German's father stayed at home to take care of him.

On 237106.27, the Galven's adopted a newborn Human/Al-Leyan baby girl while visiting the planet, Trill, and named her Arlil. German quickly took upon himself the big brother role. He was always teaching and protecting her. She was growing up to be a fine young lady. Although, both children weren't as sociable with others. Both parents were very intelligent, but lacked social skills with others. This made German and Arlil lack in communicating well with strangers. Within the house and each other, they were able to speak freely. By outside accounts, they were shy.

As German grew older, he became more interested in his mother's work. When he wasn't at school, he'd often be found by Aza's side in the lab. He would watch her and when things got too monotonous for him, he took it upon himself to know more about a certain subject, Temporal Mechanics. He wanted to know more about time travel and how to make it beneficial for people. Using what he learned from past studies and his mother's knowledge, he was becoming more efficient in science.

Coming home from school late one night when German was 15 years old, he saw Arlil playing in the front yard. Their parents were out on a date night. He walked up to her and in a playful mood, he asked her if they wanted to play hide and seek. She quickly took him up on his offer and she excitedly ran inside the house. As He started counting, he felt a rumbling around him. He quickly looked around and then at the house.

What he saw he couldn't explain at the time. There was a cubed shaped object free falling down towards the house and it crashed with such an impact that the whole ground shook. He quickly ran into the house yelling for his sister's name, but only could hear and see the carnage around him. Stepping through the rubble, he was blinded by a green looking light and was able to see a little of a strange man pick up Arlil. He tried to run after her and a piece of the ceiling collapsed on top of him, trapping him. In a daze, he saw both of them quickly vanish. When German came to, he saw his parents looking down at him. Relieved that he was okay, they quickly searched what remained of the house and found a drone. His parents knew exactly what it was. The Borg. They quickly covered it up and brought it to Aza's lab.

On the anniversary of his sister's disappearance, his father married a second woman named Stephax. She was the family counselor that helped them through Arlil's kidnapping. Although, Aza approves of her and admires her, German is very distant from her.

Rare picture of a young Aza Galven working inside the lab

After he graduated high school, German took an intern job with his mother. There, he could go and test what his mother made from the drone remains 3 years prior. Together, they were able to make such technology that wasn't provided publicly. He stayed at the lab almost every day and night. Because of his species, he doesn't require much sleep for Denobulans think it's a waste of time. There, he was able to make a visor that when put on could hear what The Collective were communicating with one another after activating the drone they found in his house. There were plenty of other achievements the Galvens made.

Through German's knowledge of Temporal Mechanics, he found that with the Borg technology that he could travel through time. At this moment, he wasn't able to travel far and this didn't hinder him. His visor was updating itself through its own AI that Aza Galven downloaded into it. These years proved beneficial for German because he knew at some point he'd be able to save his sister. She saw him getting more intelligent and way more productive that she advised him he should join Starfleet and help against the Borg and any other species that fought against the Federation.

On 239107.08, German enrolled into the Starfleet Academy. He was quick to learn and study through his courses over Quantum Physics, Temporal Mechanics, and Xenobiology. He completed his classes and was able to triple major in his favorite subjects. He never took time to play around and never allowed himself to get acquainted with anyone. He was a regular wallflower. Through endurance, integrity, and intelligence, he made it to Cadet 1st Class on 239407.21. Although training was a little difficult at first; through his trainer's guidance, Lt. Commander Ayiana Sevo, he was able to perform better. On 239507.21 Galven graduated with 2 majors in science.
Starfleet Timeline

Served as a Science Officer on the USS Veritas, a long range medium cruiser commanded by Captain Roshanara Rahman, which is currently assigned to the Shoals region. Stardates 239507.21 - 239510.31

Serves as Chief Science Officer on the USS Astraeus, a Galaxy class starship commanded by Captain Mei'konda, which is currently assigned to the Eagle Nebula region. Stardates 239606.10 - 239611.19

While on board vessels and through missions, German has made some interesting items. With some help from AI, his items develop better over time.