Lieutenant JG Stennin is a Vulcan Starfleet Lieutenant JG, currently serving in his second posting as a Science Officer at the Embassy of Duronis II. He is played by Yoerik.

Stennin was born in 2343 on Vulcan to full Vulcan parents Sars, his father, and Matra, his mother. From a young age, he was taught by his father and his paternal uncle Gasen about science. He also learned how to drum from a Terran friend to Gasen, professional band member Franklin Joust. He particularly excelled in biological sciences. In 2361, he finished his second education with an emphasis in chemistry and microbiological sciences. He applied for the Vulcan Science Academy and was accepted in the chemistry department. He worked there as a laboratory student for several years, beginning as a lab assistant. In 2370, he was promoted to lab head. In that fashion, he worked alongside multiple projects in chemical and biological studies. In 2372, he began his journey into Kolinahr, which he finished in 2375, in the accompaniment of his parents and uncle.

He left the VSA with two awards for services rendered, before enrolling into Starfleet in 2389, too further his career. He entered the academy in San Francisco, for an application into the Science department. He did a major in both Chemistry and Microbiology, becoming avid in both fields, and entering at the top of his class. He did a minor in Elementary Physics before transferring to the Academy campus on Starbase 118. He graduated in 2396, and was placed on the USS Montreal afterwards.

On his first mission, he had to work together with the Medical Department of the Montreal and the doctors on Meridian to solve a deadly disease spreading on the planet. Aiding Solok in identifying the pathogen, they succeeded in creating a new cure of the strain, alleviating the plague. During short-leave, he got to know captain Mei'konda and the rest of the crew. In the second mission, he volunteered for an away team that investigated the crashed ship of the terrorist known as Lenik of Vulcan. He was involved in the capture of the terrorist and the subsequent destruction of the Montreal. Since then, he tranferred to the USS Astraeus with the other crew of the Montreal. Due to his traumatic experiences, he went on a LOA during the Astraeus' first mission, but returned for their mission to the Eagle Nebula. After First Contact, he was reassigned to the Embassy of Duronis II because of a staff restructuring.

Stennin was raised in the traditions of the Vulcan logicism, and was taught to repress his emotions from a young age. He is known for having an ample skill at logical deduction and for his hyperthymesia that allows him to retain many skills he has learned over the years. His social skills, per human standards, resemble that of any Vulcan, however, Stennin was raised more openly about opinions by his mother and therefore is more open to debate than most of his peers. His debating skills were noted by a notable Tellarite professors for being 'Above Average'. He isn't openly fond of Romulans, since his father was part of a group of anti-Reunificationists in Stennin's youth, however has taken more of a liking to them since then. He was often clean-shaved during his youth, but since joining Starfleet, he has allowed to grow subtle stubbles on his chin. 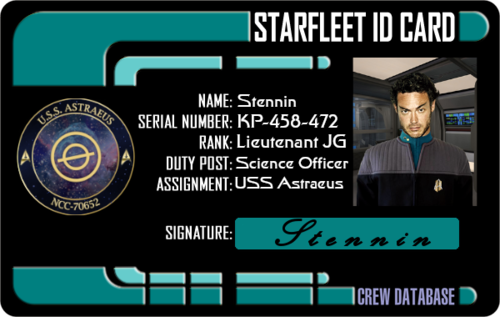