Denali Station is a Federation base, manned by Starfleet and Civilian personnel, within a city discovered abandoned on the surface of Ring 42 within the Aavaro Wilds. The City itself lies mostly unexplored, and while some functions seem familiar, with roads and buildings seemingly laid out for offices or other mundane tasks, others seem alien and baffling to the crew even as they attempt to make it their own. 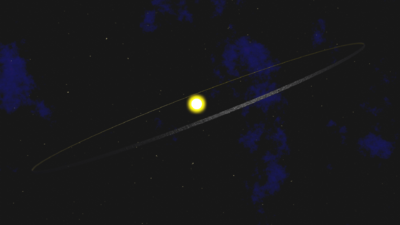 Ring 42 was discovered on stardate 239702.11[1]. Orbiting Dialran, a G-Type star, the ring has a diameter of approximately 2 AU, occupying the orbit of a typical M-Class planet (So, roughly the same diameter as the Earth's orbit from the sun). Designed with its inner surface facing the star, the Ring boasts a livable area of approximately 24,000 times that of typical class M planets.

Calling the Ring a ‘ring’ is a bit of a misnomer, as there is an intricate ‘inner ring’ made up of panels and other control structures. These structures are largely unknown in function, but one of their practical functions is to provide the surface area with day and night cycles of approximately 13 hours each - making the standard day on the surface 26 hours.

Standing on the surface of the Ring, the distance from 'North' to 'South' (one lip of the Ring to the other) is around the same from one Earth's Pole to the other. At the 'edges' are some mechanical structures, giving them some more 'height'. Traveling East to West is traversing around the Ring.

If you dig through the Ring, it would be approximately like trying to dig to the center of the Earth, with approximately the same mass between people and the 'outer' surface of the Ring. The Ring has approximately 24,000 Class M planets worth of surface area, and approximately the same proportional amount of mass (with allowances for oceans, deserts, mountains, barren areas, etc.). This mass allows for standard gravity, atmosphere, and all the other things people are used to on a 'standard' planet.

As such, the ring's surface is home to various biomes, ranging from swamps and forests, deserts and mountains, to (rarely) wastelands of bare metal. There are entire continents that appear to be well lived in, with cities and infrastructure at various levels of development, and many more that are simply untouched. In both cases, the Ring is waiting for crew exploration to discover its secrets - who built it, who came after them, what happened to them, and what technological marvels might be awaiting them.

Recognizing the need for a more permanent team to study the Ring itself, a decision was made to establish a permanent scientific expedition on the surface of Ring 42. The expedition would be tasked with discovering all they could about the Ring and its past, or intended, inhabitants.

With the decision all but finalized, the Federation Council was approached by the Cardassian Government with hopes of re-establishing minor ties in the region. The Council approved of a slightly more ambitious plan which will allow the settling of various consular officials and civilians from multiple worlds and galactic powers.

The initial plans for the station place the city and its inhabitants under the jurisdiction of its Starfleet Commanding Officer, Fleet Captain Oddas Aria, and with a crew of Engineers, Science, Tactical, Security, Intelligence Officers and more. As the city becomes inhabited by more and more civilians - both Federation citizens and others alike - the roster of characters and crew will update to reflect that, allowing full-time posting for members of the Civilian Core, Ambassadors and beyond.

While largely unexplored, initial surface scans and surveys have given the Starfleet crews some general impressions to work with. The city is roughly rectangular covering 55 square kilometers and, assuming certain norms of population density, was designed for 2.2 million people. Denali is located along the shore of an ocean on its spinward [2] side, and mostly mountains along the anti-spinward [3] side. A wide river, crossable by multiple foot and vehicular bridges, separates a majority of the city from the research facility discovered by previous Starfleet crews.[4]

The city seems to be broken up into neighborhoods, including sections for recreation, administration, industry, and more.

While long-term observations have not been made, the crew of the Grace Hopper has indicated future inhabitants should expect mild to extreme showers most evenings and temperatures in the range of 12-23C.