Valoru is a rather fit and toned Andorian who has served a good portion of his adult life in service to Andor, prior to joining Starfleet. He is a keen martial artist, but has become just as fine in the Flight Control and Operations departments. Valoru got his start on the USS Constitution-B, but has now been moved over to the USS Veritas at the helm. He is a multi-tool of sorts for the senior officers, and seeks to serve all those around him.

Looks like your typical Andorian, except with slightly longer hair that is not as neatly trimmed. He usually wears a midnight blue tight body armor suit, showing off his muscular, slender tone. He's definitely fit. He is older - especially for his rank, but he doesn't show it physically. 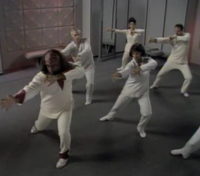 A bit sly and laid back, but also joking and snarky. Valoru tends to hang back until he feels like the fun starts, then he is fully engaged.

Valoru is proficient in many methods of martial arts, trained by his own people as well as Vulcans, Klingon, and Humans. He does not shoot a phaser hardly well at all and thus is only really a threat in close combat. And unless he wears the dark grey cloak he has in his stow-away, he's sticks out in a crowd.

He just wants to survive and watch out for the little guys. Probably considered "chaotic good" in alignment. He has recently found an increased interest in the Federation after joining Starfleet and fighting alongside them.

Mei'konda [supervisor] - Mei'konda is the first officer of the USS Veritas and has been labeled as a key figure for Valoru in HCO. The Caitian may just serve as a mentor in the Helm, Navigation, and Operations areas, having served a good portion of his career in the areas as well.

German Galven [friend] - Quirky German Galven annoyed Valoru at times, but has been a good friend in welcoming him on board and being there for the crew on missions.

Sky Blake [friend] - The security officer Sky Blake seems to be a fellow martial artist, which makes sense as the chief of her department. But the melee sparring her and Val had might just be a healthy training dose for the both of them.

Jalana Rajel [former CO] - The CO of the USS Constitution-B, Jalana Rajel swiftly became Valoru's first assignment in a way, having to play the bodyguard role aboard the SS Medina Ascending. Jalana could very well have taken care of herself, but Valoru was there to lend a hand - or a neck, as it were. His first stint on the Conny, though, gave him great respect for her commanding officer.

Andoria Above and Below Surface

From a young age, Valoru was always trained in combat. It was not necessarily the common thing for his town or his family, but it was what he wanted and his parents provided. He served in local and global protection services (police, etc) before leaving Andoria for more study of martial arts. He studied with the Klingons, the Vulcans, and Humans for a variety of martial arts skills

He had floated in the galaxy getting trained and doing odd bodyguard jobs where possible. He eventually turned to mercenary work, but tried to stay clear of less-than-favorable dealings (he mainly worked for Federation entities and businesses).

Valoru eventually settled down on a small outpost and began working more closely with Starfleet. He received basic training - more like sailed through it - and then was given an honorarium from his homeworld for all he had done in protection of the innocent and Andorians and the Federation. These formative years on the Starfleet Outpost made him a better person by far.

The Andorian oddly enough studied Operations in Starfleet, even though he was a keen martial weapon. This was driven by his work with the command officers on the Outpost and the strategy and logistics work he did therein. He was eventually sent to Starbase 118 for his Academy Cadet Cruise.

The following entities have attribution worth noting: