Ensign Sotak was serving in her second duty post as an Engineering Officer aboard the USS Astraeus, NCC-70652. 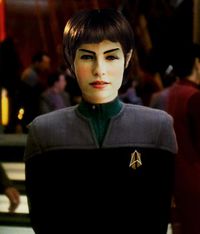 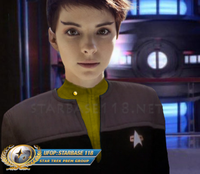 Sotak was born on the Vulcan province of Khomi, in the southern regions of the Na’Nam continent, where her father was put in charge of mining processes of the province. Like most Vulcans residing in Khomi, her family lived in an underground complex built inside a system of mountains. This kind of upbringing later turned difficult for Sotak and her brother, and so the family moved to the planet’s capital city of ShirKahr when she was 5 years of age.

Once on ShirKahr, Sotak’s mother began teaching at the Vulcan Science Academy as part of the Academy’s Medical Centre. It was there that Sotak’s curiosity about science and alien species was awakened. Her mother befriended another Vulcan named Suvnak, who also taught at the Academy. Suvnak had spent a year on Andor's Art Academy, where he’d met an Andorian with whom he bonded. As Sotak grew and continued to learn about alien customs and languages, she considered Suvnak her pyllora, and one of her biggest influences during her childhood and puberty.

Even though she attended the Vulcan Science Academy for two years, she eventually determined the best way to learn more about alien beings and to get a much better view of the universe was to join Starfleet. At the Academy, Sotak was fascinated by diversity in the galaxy, and tried to comprehend each species as best as she could, while also having a special interest in different languages.

Sotak attended the Vulcan Learning Center since her arrival to ShirKahr. Although she usually performed well, it gradually became clear to her that what she really needed was to see the galaxy first-hand, and left her studies of Theoretical Physics and Quantum Mechanics in the Vulcan Science Academy incomplete.

Once in Starfleet Academy, Sotak had a double major in science, with specialisations on Linguistics and Xenology.