Skyleena Blake is a half Brekkian, half Betazoid serving as Vice Chief of the Colonial Coalition Marshals Service.

She previously served as a Starfleet officer aboard the USS Challenger-A, USS Ronin, USS Mercury, USS Avandar, USS Vigilant, USS Syracuse, and USS Veritas, earning the rank of Commander. She retired from active service in mid-2398. 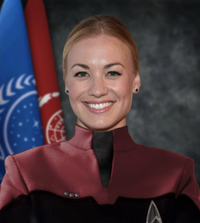 Blake is a humanoid of Brekkian and Betazoid descent, sharing emerald green eyes with her Brekkian father but lacks any notable Brekkian features. She is 5'10 and sports short blonde hair, just long enough to be tied back. She wears three rings on her right hand, denoting her marriage to Sabor, placed on her thumb (a plain copper band), second (a plain gold band), and fourth (a stainless steel band with emerald gemstone) fingers, respectively.

Because she is part Brekkian, Blake's body temperature is higher than that of the average humanoid. Her skin is surprisingly warm if not hot to touch. She often wears layers when operating aboard Federation vessels, adding additional pieces to her uniform to remain warm in what are otherwise regular temperate environments. She may even go so far as to wear thick thermal clothing to replace parts of her uniform or add more layers underneath it.

She will wear comfortable form-fitting clothing when dressing outside of duty. Usually consists of brightly coloured, but otherwise plain clothing — typically a t-shirt and shorts. Blake thrives in hot climates and enjoys this casual getup when possible. Outside of her quarters, and in temperatures under 30 degrees, she is not known to allow much exposure of her skin, and she will wear well-fitted, long-sleeve shirts with a neckline no lower than her collar bone. If it is still too cold, she will resort to wearing thick thermal skins designed to retain her body temperature, and gloves if necessary.

"You're a widow, Commander. Born out of ash and fire with just five years of life under your belt. The things that scare you are complex - they are very real problems. But some of us are simply spooked by a darkened corridor."

— Kallo Ver, "The unordinary man of the Shoals."

Blake's life revolves near-exclusively around her job in the Shoals. Her position aboard the Veritas and her role as a Starfleet Ranger provided her with a purpose she didn't have prior to re-joining Starfleet. She takes threats to the Shoals region incredibly seriously and becomes frustrated when her fellows (especially those in Starfleet]] don't show the same level of commitment to the rules and regulations of the areas—such as Kelrod discharging a phaser to stop an escalating physical conflict in a Ketar V establishment, which ultimately lands he, Wil Ukinix, and Captain Roshanara Rahman in Colonial Coalition Marshals holding cells. Comparatively, when an officer is untrusting of the Marshals, Blake becomes equally frustrated, regardless of whether she knows they are right in their assumptions (as is the case with Hannibal Parker).

Blake prefers an advisory role specifically in the Shoals — which is the reason she was re-recruited back to Starfleet in 2392. She even admits to Rahman that she doesn't like being aboard starships because of the ongoing impact the environment has on her ill-suited physical health, but continued to serve for the positive influence the purpose of service provides for her mental health. To some, Blake may have been a controversial choice of executive officer for USS Veritas. She is highly critical of Starfleet as an organisation, perceiving its current operations as being a flawed result of increased paranoia following the events of the Dominion War.

Blake sometimes struggles to "switch off" from her duties, making it hard for others to connect with her on a personal level. Some may find it easier to only engage with Blake on duty, but with persistence, it is possible to break through her all-work-no-play psyche, revealing an easy-going woman. She surrounds herself deliberately with colour, having subscribed rather heavily into Ornaran colour psychology, and is considerably bright and charismatic when faced with relaxed social settings. Blake is strict with herself and tries her best to abide by social norms, rules, and laws of other cultures or colonies.

Blake will ask questions and press for more information when she feels she does not have all the answers she requires, though admittedly becomes frustrated if others refuse to provide them. When required to make decisions, she prefers all have had their say first so that she can determine a course of action based on the information provided — though she has on occasion been known to make rash, ill-thought-out decisions when the crew is on a time crunch, possibly explaining her constant need for information.

If irritated, she becomes cold and blunt. However, she will not raise her voice when speaking to others.

Blake has struggled to set down roots and maintains homesteads in several different locations—including on Delos IV, Shadow's Edge, and Meridian. Though not originating from the Shoals, she is rather "patriotic" about the area, going so far as to demand the Colonial Coalition flag in her official Starfleet portrait.

Zhou: You’ve always been uncomfortable when you’ve met people from that “other” Sky’s past. The familiarity foreign to you.

In this regard, Zhou had been lucky. He’d never heard of or met Sky Blake before his mission to go find her on Ornara and recruit her help when Veritas had been tasked with dealing with Brekkian drug smuggler pushing felicium into the Shoals. Perhaps that was why she’d been willing to let him get so close.

Zhou: I don’t think this is as much about being offended as it is you worried you’re going to find out more about who you really were once… and maybe not living up to that. ::He shrugged.:: Or maybe just finding out how much you’ve changed.

Blake: I’ve heard about the woman I was. ::She shook her head.:: I didn’t like her very much.

Despite her committed relationship to Rairen Caide, Blake still wears three rings denoting her marriage to Sabor, her Vulcan bond-mate who was killed in 2391, on her right-hand thumb, second, and fourth fingers. Though she is protective of her children and their privacy, she frequently entrusts others to watch over them when she is not available—which is often the case for her son Ayeden, who has had countless guardians over the last two years alone.

If faced with information about her life prior to her amnesia, Blake will recoil and immediately attempt to retract herself from the situation. She fears her "past life" and does not wish to be someone she is not. She encourages Tristam Core to delete a holographic version of herself, adamant that a second Sky Blake (from years ago) is of no benefit to anyone, and considers the hologram as nothing more than a dangerous ghost.

Blake considers her quarters to be much too large to inhabit, preferring small work areas. Her office is described as having been deliberately cluttered with items of various origin, though none are truly personal to her. The door is programmed to remain open unless privacy was required to encourage walk-ins, and is a deliberate attempt at forgoing a formal feel. Blake attached a bar to the ceiling of the room of which is used for exercise, an accompanying safety mat can also be located within the office. Shelving with various PADDs can be located to the right of the room when walking in. On the left, a display connected to the Colonial Coalition Marshals Service database updates.

Blake is (begrudgingly) a vegetarian, though not by conscious choice of her own. She mentions to Wil Ukinix that it is a psychological result of her bond to Sabor, a Vulcan.

She's proficient in the Brekkian language of Seritonian (her mother tongue) and is also surprisingly fluent in at least two Ornaran and Vulcan dialects. Blake is a Federation citizen by marriage—as is her son by birth. Her daughter, however, is currently considered a dual citizen of Brekka and Ornara, making relocating her particularly difficult when Brekka creates policies disallowing permanent relocation. When the Federation refuses to provide assistance, the Eleventh and Twentieth House of Betazed steps in, as Blake is a member of the former and Ilakai is revealed to be a member of the latter.