Miskre Swenhart is a Dokkaran serving aboard Starbase 118 Ops as a 2nd Class Crewman Engineer. 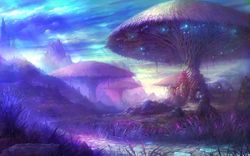 Miskre was born on Ceata beneath the branches of the great Vizinyian Trees. Raised in an extremely religious and peaceful culture, she wanted to spread her species kind of peace throughout the Quadrant. When she was younger, she always surrounded herself with The Lady and built her ideas around what The Elders had told Dokkarans about politics. Although violence was never spoken of, she knew what she was getting herself into when she joined Starfleet. Sometimes her imaginative behavior gets in the way of others and she becomes detached from the rest of the crew when there's not an issue that needs to be taken care of.

As Dokkarans don't believe in the idea of marriage, neither does she. If she finds someone attractive, she'll become The Chaser and will expect another to do the same if they find her attractive. The race has no regard for gender roles. There's no reason for Miskre to stay in a relationship once the courtship has run its course. It's common for her if she feels the need to be in a group to have a comforted self assurance.

Her home planet's military isn't as monumentous as Starfleet. She became an engineer to learn more about how to build upon other ideas to create more of a controlled militaristic border for Caeta. She's not ignorant of other species and knows that there are barbaric tactics used from the unknowns. She's extremely quick to learn new things and while visiting Earth, she learned how mechanical engineering works and wanted to expand on it with a career.

She has a very peaceful demeanor about herself and always has a grinned expression on her face. The way she carries herself is different than most. She walks in a swayed motion as if she's lost in thought. However, that's not the case. She's very intelligent and preoccupies herself with work. She's a vegetarian, but doesn't eat the entire plant for to her it's demeaning and taboo.