The Invicta crew, manning the USS Venture, are returning home from the Khitomer Accords centennial when they are suddenly swept back in time and space to the year 2267 and the old Klingon Neutral Zone. 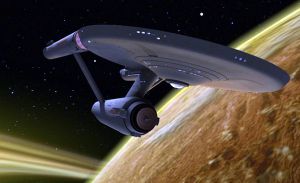 Fifty years ago this month, those words were heard on television sets for the first time, and in the half century since, Star Trek has become one of the most enduring pop culture phenomenons across the globe. To celebrate this anniversary, our mission is a tribute to that first series, the original Star Trek that aired from 1966 to 1969, ending just one month shy of Apollo 11's lunar landing.

Live long and prosper, and let's have some fun!

After getting the old Constitution class USS Venture turned from a museum ship into a working vessel again for parade celebrations for the centennial anniversary of the Khitomer Accords, the Invicta crew were returning home from Khitomer when they suddenly found themselves swept back in time through a rift to the year 2267, now in the old Klingon Neutral Zone. A group of Klingon battle cruisers set upon them, but as the Venture made their escape into a nearby nebula to hide, the Klingon ships themselves were quickly destroyed by the planet killer aka the Doomsday Machine that is heading on its way towards Federation space, where history records that it will encounter the USS Constellation and the USS Enterprise before eventually being defeated by Kirk and his crew.

However, the planet killer threatened to destroy the remaining planets in the Kavos system, where a landing party from the Venture has been sent to retrieve a group of Klingon survivors on the surface, among them, the future Chancellor Gorkon, who helped broker peace between the Federation and the Klingon Empire at Khitomer. Unfortunately, the landing party on Kavos IV discovered that Gorkon died from his injuries. Meanwhile another team from the Venture went via shuttle craft to one of the wrecks of the Klingon ships to salvage much needed dilithium crystals for the Venture.

The landing parties returned to the Venture along with the Klingon survivors. The crew were now tasked with slowing down the planet killer to make their escape. Two shuttles, one piloted by a Klingon named Ukith and the other piloted by Lt. Cmdr. Rune Jolara were rigged with torpedoes to self-destruct and headed towards the mouth of the planet killer while the Venture provided cover fire. During the battle, Ukith was killed when his shuttle was hit by the planet killer's antiproton beam. Jolara was beamed back aboard at the final moment, and the Venture launched into warp speed just before her shuttle exploded in the maw of the planet killer, leaving it disabled but able to repair itself to continue onward to meet the Constellation and Enterprise.

As the crew faced the prospect of repairing the damage to the timeline and finding a way to save Gorkon using the slingshot timewarp maneuver, they first headed towards the Klingon side of the Neutral Zone to return the Klingon survivors to their government. The Venture was soon met by a fleet of forty Klingon warships, which had been assembled to fight the planet killer. After Captain Rahman explained that the device was neutralized, the general of the Klingon armada thanked Rahman and the crew of the Venture, and they learned that he was in fact General Gorkon, the man who would become the future Chancellor and peacemaker. Though he learned that his son Gorkon the Second had perished, the general was grateful to know he had died with honor, and the seeds of peace towards a better future between the Klingon Empire and the United Federation of Planets were planted before the Venture crew returned home to the 24th century.