After an unexpected change in command, the Invicta returns to Nygel II to investigate ancient ruins. But when the crew attempt to bring back a curious artifact, the ship is rendered dead in space and the crew's memories erased. 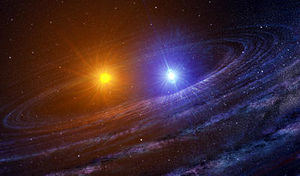 Nygel system, previously visited by the USS Mercury in 2390 ("No Rest for the Wicked")

Over shoreleave, Lt. Cmdr. T'Lea explained that she had visited worlds that had been visited by the Iconians. Cmdr. Saveron mentioned that the crew had previously visited such a world in the region known as Nygel II while they were aboard the USS Mercury. T'Lea made a request to revisit the planet, and it was subsequently approved.

The Invicta arrived back at Nygel II. The Iconian Gateway that had been discovered there was also destroyed previously when the Mercury was last here, but an archaeological team was examining the ruins. The Invicta was told there was another set of ruins on the far side of the planet that had yet to be explored. The ruins turned out to be below tons of magnesite, which rendered transporters inoperative, so two shuttle crews were sent down to investigate.

One shuttle team consisting of Saveron, Hanar Tuk, T'Lea, Rune Jolara, Luna Walker remained on the surface. The other shuttecraft returned to the Invicta but abruptly lost power and crashed into the shuttle bay. That team consisted of newly assigned first officer Kinan Venroe, Alora DeVeau, Raj Blueheart, and Marcus Dickens. Meanwhile, on the bridge was the Invicta's new CO Joseph Washington, who was assigned to take command of the ship when Roshanara Rahman had to take a sudden LOA for personal reasons. Along with Washington on the bridge were Della Vetri, Aron Kells, Raissa Moonsong, Tertius Luca, and Ra'Dar Dregen.

An artifact that the shuttle was carrying when it crashed into the shuttlebay caused both the shuttle and ship to temporarily lose power. It also seemingly wiped away everyone's memories, although it felt like the knowledge was still hidden just below the surface.

On the bridge, Fleet Captain Kells suddenly felt a presence within him take control, telling the bridge crew they needed to hurry to regain control of the ship to prevent it from falling into the atmosphere of the planet. However, "someone" also awoke within Commander Washington at the same time, who then proceeded to attack Captain Kells, locking out the bridge.

Washington, Vetri, and Dregen then escaped to Engineering. There, they met up with engineer Danni James. Kells and co beamed themselves to the captain's yacht and then broke free from the Invicta using their weapons. James was injured, and Washington beamed Vetri, Dregen, and James to sickbay.

Meanwhile, back on the surface, Saveron's encounter with one of the "stored memories/katras" on the planet reveals what seems to be going on: the crew have awakened a memory ark of some kind, where at least two factions, each devoted to one of two goddesses (Masarya and Hassam) fought in a bloody war that eventually destroyed them all and devastated the planet.

Back on the ship, Kinan's team made their way to sickbay as well and they haven't yet been taken over by any "passengers," although one tried to unsuccessfully take control of Dickens. In sickbay, they've met up with Dr. Nic del Vedova, who's been able to help them connect names to faces, and now they hope to find a way to contact the surface team.

The surface team, though, has encountered troubles as two passengers inhabiting Jolara and T'Lea have escaped, taking the team's shuttle with them to join back up with the Invicta, leaving Walker, Tuk, and Saveron (currently also inhabited by another passenger from a third, neutral faction) stranded on the surface.

Finally, in a darkened classroom, three children--Saavok, T'Sana, and Tasnim Shandres--rekindled their memories and made their escape into the Jefferies tube.