In the wake of the disaster aboard the Prometheus Station, the planet Peppalexa, which vanished from history thousands of years ago, has suddenly appeared in the same system. The Ancient Alliance is believed by some Federation archaeologists and historians to have been an alliance of spacefaring species that existed over ten thousand years ago. Their territory included the majority of the Menthar Corridor, and vast regions of the territories belonging to the Breen, Tholians, and Cardassians, as well as several other minor powers.

Based on fragmented historical records, the Peppalexans were once an integral and powerful member of the Alliance before they disappeared from Alliance records at the beginning of the Alliance’s decline. Historians have long assumed that their disappearance was due to several socioeconomic and political factors and that historical narratives that described the species and planet “vanishing without a trace” were merely that of legends and morality tales.

In addition to the taskforce Starfleet has already sent to the Piktar system in response to the Prometheus Station crisis, the USS Garuda has been assigned to investigate the Peppalexan homeworld. Initial reports from away teams indicate that the Peppalexans themselves may have had a hand in transporting their planet through time, either by accident or as a deliberate act by a group of separatists on the planet.

Regardless, temporal fragments remain across the planet. One away team had several members disappear suddenly only to reappear a few minutes later, while another away team led by the Garuda’s first officer Lt. Cmdr. Msafiri Bakari has seemingly vanished after beam down. Just as Captain Cassandra Egan Manno and her crew began to work on finding their missing comrades, several Breen warships arrived in the system, apparently intent on protecting Peppalexa, which to the Breen is known as the “World of Heroes.”

The USS Garuda had been investigating the sudden reappearance of Peppalexa, the homeworld and capital of the Ancient Alliance that vanished from history over ten thousand years ago. The temporal disturbance that had allowed the planet to travel through time, caused by separatists among the population, had also resulted in the creation of temporal fragments that left parts of the planet in various states of temporal flux. 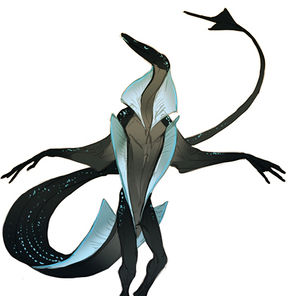 The Peppalexans were the leaders of the Ancient Alliance when they disappeared from history without a trace.

An away team led by first officer Lt. Cmdr. Msafiri Bakari had been sent back in time to the era of the First Kingdom of Peppalexa, at least several thousand years before the rise of the Ancient Alliance. The team was quickly incapacitated by the natives, and Dr. Chythar Skyfire took the lead when Bakari and another commander were kept in confinement.

As the crew in the present worked on finding a way to retrieve their missing officers, the arrival of the Breen complicated matters, especially when the Peppalexans called to the Breen to assist them in sending Peppalexa back in time, claiming that Captain Cassandra Egan Manno and the Garuda were unwilling to do so. Fortunately, Counselor Raissa Moonsong and Egan Manno were able to negotiate with the Breen to ease the tension.

Back in the First Kingdom Era, Skyfire, Andrew Davenport, and Ensign Ryan King found themselves caught in the midst of a political struggle between the Queen of the First Kingdom and her First Minister. Skyfire then made the startling discovery of the skeletal remains of three people he recognized: Saveron, Core, and Shandres.

Tricorder scans showed they'd been dead for thousands of years. The First Kingdom Era inhabitants described the remains and the various "artifacts," which were in fact the Starfleet equipment of the dead officers, as relics that had been integral to the advancement of Peppalexan civilization.

Before they could investigate further, they were suddenly beamed out of the temporal fragment to the bridge of the Garuda in the present by Dr. Roshanara Rahman, a project manager for the Starfleet Corps of Engineers, and Lt. JG Hanar Tuk. Rahman and Tuk then worked with operations chief Lt. Cmdr. Mei'konda on the surface to rescue Saveron and the remaining missing crew with the help of the separatists.

Using calculations by Chief Ian Dunross, a temporal rift opened by the separatists, and a set of pattern enhancers, the crew were able to retrieve the others, but it seemed Saveron, Core, and Shandres had been in the past for too long, with the transporter unable to get a lock on them.

In a last desperate attempt, Rahman crosswired the transporter to use two sets of coils for each target. Though the unpleasant transport was described by the officers as if they were being torn apart, they were nonetheless beamed back successfully to the 24th century.