The Garuda crew had been enjoying shoreleave at the nearby Deep Space 10 station when they were ordered to report to Astrofori One. The Garuda‘s commanding officer Cassandra Egan Manno was promoted to Fleet Captain and would serve now as Region and Mission Commander for Starfleet in the Menthar Corridor and will be based from Astrofori One. Captain Aron Kells was named her successor as commanding officer of the Garuda. When Egan Manno took her first officer Msafiri Bakari with her to her new post, Kells made the surprising choice to request that his former chief engineer Roshanara Rahman now serve as his first officer. The new command team would be quickly put to the test.

The Astrofori One Project, the brainchild of Federation Ambassador and presidential candidate Lily Ventu, has been hailed as a bold step forward in interstellar diplomacy. While the Federation, Romulans, Breen, and Kubarey are the four major powers of the project, numerous other species and groups have also been invited to become a part of the galactic forum. However, trouble may be brewing already between some of the participants. 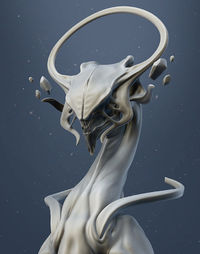 Strong allegations by the Kubarey Confederation and the recently reintroduced Peppalexans have been made against one of those species, known as the Va Wreth. Most information about the Va Wreth classify them as a nomadic species of traders, and they have passed through the Menthar region of space on a number of occasions.

The Peppalexans state that ten thousand years ago, the Va Wreth were at war with the Ancient Alliance over attempts to block or regulate their trade routes which ran through the middle of Alliance space. Despite heavy losses, the Va Wreth eventually overwhelmed the majority of Alliance species. Peppalexan records further show that they cannibalized their fallen foes and committed other atrocities.

Confounding the matter is that the Va Wreth were invited to join Astrofori One by the Tholians, who have had contact with them. Given the Tholians normally xenophobic nature, the move is surprising. The proposal was seconded by the Romulans, who recall a very different Va Wreth who were eager to trade, communicate and make connections with for the future. Two thousand years ago, the Va Wreth passed through what became Romulan space and helped those fleeing Vulcan to establish themselves by trading supplies.

The Garuda crew were ordered by Egan Manno to investigate the claims as discretely as possible. One team, led by Capt. Kells, attempted to go undercover disguised as a group of Romulans to gather more information from the other species aboard the station and what they know about the Va Wreth. After speaking with Romulans, Tholians, and others, the team split up with one set of officers taking the Garuda out under the command of Dr. Chythar Skyfire to search for the Va Wreth’s nearby contacts. Skyfire’s search led the ship to a Taredge colony the Va Wreth visited that wasn’t answering the Garuda’s hails.

Meanwhile, another team led by Rahman launched an operation to seek any direct evidence for the Kubarey and Peppalexan claims during a reception held by the Va Wreth. However, just as the operation was underway, an old enemy chose this time to make a reappearance: Harrison Ross, the Garuda’s former first officer who betrayed his crew last year and kidnapped the Garuda’s Director of Intelligence Capt. Quinn Reynolds.

Now, the Garuda crew must work with Federation Security to protect the President and other VIPs attending from whatever plan Ross might have in store, but if the Va Wreth crisis isn’t resolved, Ross might not have to do anything before the entire diplomatic experiment unravels.

Ultimately, the crew discovered that the conflicting views of the Va Wreth – seen by some as helpful traders and others as an unstoppable force – were both valid. When the Va Wreth population is stable with a low rate of adult turnover, they trade and negotiate for what they want amicably with other species such as the Tholians and early Romulans who had just left Vulcan.

Yet because of how vital trade is to their survival, the Va Wreth do not respond well to threats and being denied access to their trade routes. They swiftly attack those who blockade them. All of the fallen, whether their own or their enemies, is used to feed the Va Wreth larvae and adults, which grow rapidly and the ranks of the Va Wreth swell. This exponential growth rate allows them to overwhelm their enemy in numbers, even if they suffer heavy losses. It was this version of the Va Wreth that the Peppalexans remembered as having no end.

The Va Wreth delegation assisted Fleet Captain Egan Manno, Captain Aron Kells, and the rest of the Garuda crew in defusing the situation by clearing the station during final negotiations. Ultimately, three of the four members of the majority council – the Federation, Breen, and Romulans – voted for the continued presence of the Va Wreth while the Kubarey chose to abstain.

Meanwhile, on the eve of the Federation President’s State of the Federation address, a team led by Garuda‘s first officer Lt. Cmdr. Roshanara Rahman captured Commander Harrison Ross, who himself was the former first officer of the Garuda before he betrayed his crew last year. During an intense standoff, the team discovered that Ross and his associates had infiltrated even the upper levels of the president’s security detail.

Fortunately, the true Harrison Ross, who was being imprisoned within his own body by the shadow personality that had taken over, was able to reveal to Captain Quinn Reynolds that the true target of the shadow Ross’s plan was not the President but businessman Tyson Holt. Further interrogation by Lt. Cmdr. Evan Delano revealed the other names of his accomplices, but just how Delano was able to extract the information from Ross – a forced mind meld – is now under investigation.

Just as Captain Kells and his crew were about to sit back as honored guests at the State of the Federation address aboard the USS Invicta, the captain suddenly found himself asked to stand as the President announced that he and his crew were to lead the Invicta Expedition, the first of a bold new set of dedicated research and exploratory missions into the farthest corners of the galaxy.