One of the densest known clouds of protomatter has been discovered near Deep Space 10, and the USS Garuda has been dispatched to survey the finding. Dubbed the Genesis Cloud, a reference to the 23rd century terraforming project that had used protomatter at its core, the cloud was first identified by the Qilin Project.

Starfleet, eager to return a sense of normalcy to the troubled region after the recent terrorist attack by the Maquis Reborn, has assigned the USS Garuda to investigate the cloud, which is eight hours from Deep Space 10 at warp.

For their actions during the crisis aboard Deep Space 10, the Garuda crew were awarded the Silver Star, and the ship’s first officer Nia Calderan was promoted to commander and named Federation Ambassador to the region. The crew spent much of the aftermath of the Maquis attack helping the station rebuild and reconnecting with their own loved ones. Several crew members attended a charity bazaar for the reopening of Room 7, a local bar and club.

With the upcoming scientific mission, Starfleet also hopes to reconnect with the Community, a species native to the Menthar Corridor comprised of a collective consciousness that uses plant-like forms to communicate. Starfleet had previously encountered the Community during their dispute with their long-term enemy the Myr Luuk. The Federation Diplomatic Corps hopes a demonstration of a standard scientific survey to visiting delegates from the Community will help pave the way for renewed relations between the Federation and the Community.

While surveying the largest protomatter cloud ever discovered, the USS Garuda found itself fending off a botanical infestation controlled by a hostile intelligence within the cloud. 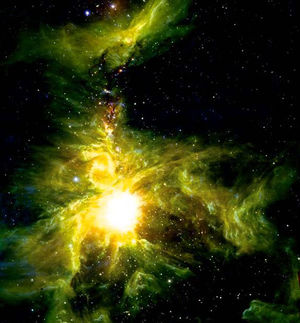 The sudden infestation appeared overnight. The Garuda had been ordered to investigate the Genesis Cloud, which had been discovered by the Qilin Project. Initial sensor readings were off the scale of any previously found protomatter deposits.

The survey would also be a diplomatic mission that hoped to rebuild trust and understanding between the Federation and the Community, a species native to the Menthar Corridor comprised of a collective consciousness that uses plant-like forms to communicate. Representatives of the Community came aboard the Garuda to witness standard Starfleet scientific procedures and evaluate the crew.

By all accounts, the survey itself was a success as an engineering team headed by Garuda’s chief engineer Lt. Cmdr. Tristam Core and operations chief Lt. Cmdr. Mei'konda constructed a specialized shuttle dubbed the Robert Ballard to explore the volatile protomatter cloud and collect samples. Expertly piloted by Lt. Kaitlyn Falcon, the shuttle returned safely with the valuable data, and alpha shift retired for the night.

Yet things slowly grew amiss in the early hours of the morning. As drastically growing plants began spreading across the ship, the Garuda’s chief science officer Lt. Alora DeVeau went missing. Additional reports of other missing crew members came in, including that of one unfortunate crewman who had been dressed as Santa Claus for a department Christmas party. The children would have to wait a little bit longer for their presents as the crew soon found themselves battling a shipwide plant infestation. From small houseplants to the large trees of the ship’s arboretum, it seemed all plant life aboard the Garuda was being affected somehow by the protomatter, growing exponentially in size.

Worse, it was apparent that the plant life exhibited hostile behaviors as crew members struggled against slithering vines attempting to capture them. Finally, DeVeau reappeared, her body having been taken over by an alien influence. Holding hostages in the arboretum, she announced to the Garuda’s commanding officer Captain Cassandra Egan Manno that she was speaking on behalf of the Kindred, an intelligence that resided within the Genesis Cloud. Its intent was to capture the crew and use their bodies to escape the protomatter cloud.

However, Egan Manno had a plan. The shuttlecraft Ballard was secretly piloted by remote back into the center of the cloud. Then, during Egan Manno’s direct meeting with DeVeau in the arboretum, the captain revealed the shuttle would ignite the entire cloud if the Kindred did not comply. The Kindred were defiant, and the captain gave the order, destroying the cloud and bringing the crisis to an end.