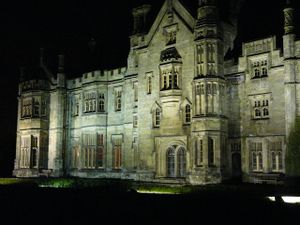 A celebration turns into a murder investigation when a Cardassian diplomat is found dead during the Gorkon's awards after-party. Trapped inside a sabotaged holodeck, will they be able to find the murderer, while keeping themselves and their guests safe?

The crew of the U.S.S. Gorkon was celebrating their first mission on Astrofori One, in one of its many holodecks. The setting was an old Earth “Victorian” mansion. It was packed with delegates from the Federation and around the Menthar Corridor. Captain Quinn Reynolds, having just delivered her awards ceremony to her crew, found herself needing some solitude in the mansion.

Entering the library, Reynolds discovers the body of a dead Cardassian - Kotan Jara, envoy of the Cardassian Union. She quickly discovers that communications are disabled, as well as any access to the computer, including the holodeck Arch, exit, and control panels. Lieutenant JG Lael Rosek and Ensign Jansen Orrey enter shortly thereafter, and are quickly brought up to speed. Captain Reynolds asks Lt. Rosek to discreetly summon the rest of the senior staff to the library to discuss the situation without alerting the guests; which unfortunately includes the media, diplomats, and Starfleet flag officers.

After the senior staff arrive, Captain Reynolds brings them up to speed. Commander Alucard Vess quickly determines that the Cardassian had died no more than an hour earlier, from a small but sharp & serrated knife. They surmise two possibilities: either the killer escaped the holodeck somehow, or is still hiding in the crowd.

Captain Reynolds assigned tasks to the crew. Commanders Eerie & Vess, and Lts. Adam Haase & Dar Elandra are asked to keep the situation from leaking to the guests. Eerie ends up standing guard outside the library door. Commander Chythar Skyfire, Lts. Ayiana Sevo, Cory Stoyer & Paul Sharpe are tasked to finding a way out of the holodeck, or at least gain access to the computer. Finally, Lt. Rosek, Ensigns Orrey & Lenaz Anya, and Doctor Lilavati Chandur are ordered to find more clues to the mystery.

Captain Reynolds’ group found their way to a dungeon deep in the castle, a feature believed not to be a part of the original program. There, they found a bound and tortured Gorkon crewman on an ancient torture device. While attempting to free the man, Ensign Orrey and Lt. Rosek activated a trap door and fell further into the bowels of the castle. Meanwhile, the rest of Reynolds’ team worked their way outside to the gardens, where an elaborate hedge maze had been created. While chasing a lead, Reynolds came across Walter Brunsig, a friend of hers. He was critically injured by a primitive projectile weapon from an unseen adversary. At the same moment, the sky was lit up with a fiery emblem of the Maquis Reborn, ending the mystery of who the assailants and saboteurs were.

Meanwhile, back in the library, Commander Eerie had dragged in a werewolf creature that had attacked him and an envoy of a diplomat, counselor, and journalist. Commander Skyfire, Lts. Sevo, Stoyer & Sharpe managed to determine how the assassin escaped. Meanwhile, pieces of the program were starting to break down from the saboteur’s hack of the program.

Eventually, everyone regrouped in the library, where they finally managed to shut down the program with some creative engineering workarounds. Unbeknownst to them, however, two assassins who had been inside holodeck all along managed to escape via a secret exit, stunning the engineering team outside the holodeck and making an escape.

With the program shut down, the crew regrouped and were divided up into two teams. One was tasked with chasing the escaping assassins, while another attempted to free hostages from a similar attack at the Cardassian Embassy. The pursuing group eventually found their way into a cargo bay which had been set up by the assassins as an ambush with automated turrets. Taking some injuries, the team eventually managed to take out the turrets, but the assassins had already fled into a shuttle. Taunting them over a viewscreen, the group was informed that several dozen passengers of another shuttle had been transported to a barren planet. The group were forced to take shuttles to rescue the stranded people, letting the assassins escape.

Meanwhile, the other group led by Captain Reynolds managed to penetrate the anti-surveillance countermeasures in the Cardassian Embassy. They determined that the hostages were alive, but possibly infected with a life-threatening virus. Eventually, the team managed to transport all the hostages to the Gorkon for medical treatment.