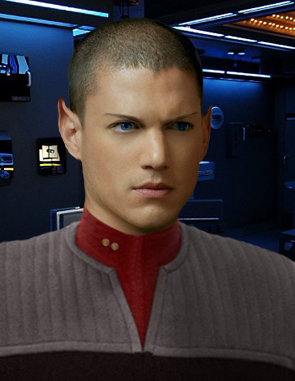 Evan Delano pleaded guilty during his court martial and was subsequently demoted to lieutenant.

While docked at Astrofori One for shore leave, a rare shipboard court martial was held aboard the USS Invicta for the ship’s chief of security.

Recovering from their interrupted shakedown cruise in which members of the Q Continuum put them through a series of trials and games, the USS Invicta returned to Astrofori One, escorting the recovered USS Yamaguchi.

While some of the crew were able to enjoy R&R with a cultural festival hosted by the Taredge delegation aboard the station and a holodeck adventure of dubious historical accuracy, others had to deal with unexpected crises that occurred during shore leave. Chief engineer Tristam Core was stunned to see that the centerpiece of the Invicta’s unique bridge–a conference table for the senior staff–had gone missing, apparently traded away temporarily for favors. With the help of Astrofori One’s chief of operations Juanita Sanchez, he was able to retrieve the table just in time.

However, it was the shipboard court martial of chief of security Evan Delano that was heavy on most of the crew’s minds. A respected department leader, Delano was charged with the assault of a prisoner and conduct unbecoming of an officer. The prisoner, Commander Harrison Ross, who had previously betrayed the crew while serving as their first officer aboard the Garuda, was captured before he could execute his plan to assassinate New Alliance CEO Tyson Holt during the President’s State of the Federation address on Astrofori One earlier this year. When Ross goaded Delano during his interrogation, the chief of security performed a forced mind meld in an attempt to retrieve any more information from the traitor.

With Starfleet JAG not yet available at the newly opened Astrofori One station, Delano opted for a court martial aboard the Invicta. As such, first officer Roshanara Rahman served as prosecutor, Captain Aron Kells as his defense advocate, and the ship’s second officer Dr. Saveron as judge. In a stunning turn of events, Delano pleaded guilty to all charges.

During sentencing, Rahman had argued for Delano’s demotion, imprisonment, and dismissal from the service due to his loss of control. Kells countered that the circumstances of the case ultimately showed that Delano had in fact aided the true personality of Harrison Ross that had been subjugated by an implanted shadow personality. Saveron seemed swayed by this argument in his final ruling and ruled that Delano be demoted to the rank of lieutenant. However, in light of the evidence and his previous service, his prison sentence was suspended, and he was instead sentenced to Vulcan emotional and telepathic training and community service by serving the diplomatic staff aboard the Invicta.