Encounter with the Doomsday Machine (2267)
Report by Msafiri Bakari

Of all the legendary feats performed by the illustrious Captain James T. Kirk and the crew of the original USS Enterprise, perhaps none has saved more lives than Kirk's defeat of an ancient extragalactic weapon of mass destruction known simply as the "planet killer." Had Kirk and his crew failed to stop the planet killer, countless worlds would have been destroyed as the weapon moved through the heart of our galaxy.

No one knows who built the device or if its builders are even still in existence. Based on its trajectory, the planet killer is believed to have originated from outside the Milky Way galaxy. A monstrous weapon at a length of approximately 2700 meters, the planet killer easily dwarfed any Starfleet vessel of the 23rd century and even the largest vessels of today. It appeared to be fully-autonomous with no communication possible with whatever intelligence controlled it. Encased in a thick hull of pure neutronium, the planet killer proved impervious to all weapons, and it was entirely self-sufficient, replenishing itself on the planets it destroyed using a beam of pure antiprotons. The device further projected a vast field of subspace interference that effectively rendered both long-range communications and sensors useless.

The Doomsday Machine, aka the "Planet Killer"

Fortunately for the Enterprise, deflector shields of the time were sufficient to provide initial protection against a strike from the planet killer's antiproton beam; however, the planet killer was also able to maneuver to such a nimble degree that the Enterprise was forced to expend much of its energy reserves to stay ahead of it. Any ships that veered too close to the "maw" of the planet killer were subsequently caught in a powerful tractor beam.

The USS Constellation, commanded by Commodore Matt Decker, was a Constitution class starship like the Enterprise. In 2267, the Constellation discovered several destroyed solar systems but was unable to report to Starfleet Command of their findings due to heavy subspace interference, later learned to be caused by the planet killer. 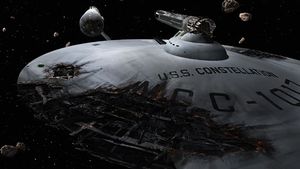 Wreck of the USS Constellation

An away team led by Kirk beamed over to the wreck of the Constellation and found most systems damaged beyond repair along with Decker still sitting distraught in Auxiliary Control. After Decker reported what had happened, he was beamed back to the Enterprise with the Enterprise's chief medical officer Dr. Leonard McCoy. 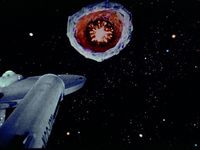 Soon thereafter, the planet killer returned to the area and immediately attacked the Enterprise. Though the ship's first officer Commander Spock attempted evasive action, he was relieved of command by Decker, who felt it was imperative to destroy the planet killer before it proceeded further into the more heavily populated regions of the galaxy, its next probably target being the Rigel system. However, like the Constellation's earlier battle with the planet killer, the Enterprise was soon swiftly defeated and held in a tractor beam.

By this time, chief engineer Lt. Commander Montgomery Scott and his repair team aboard the Constellation had been able to restore some systems including impulse engines and one phaser bank. Kirk quickly took the Constellation towards the planet killer to provide a new diversion for the device. The effort was successful, and both the Enterprise and Constellation were able to escape destruction.

Though Decker wished to continue the attack against the planet killer, now with two ships, Kirk ordered that Spock retake command of the Enterprise and relieve Decker. As Decker was being escorted to sickbay, he escaped and made his way to the shuttle bay, where he then launched a shuttle and piloted it towards the planet killer. Kirk and Spock attempted in vain to get Decker to turn back around, but the commodore, still overcome with grief and guilt over the loss of his crew, instead made a suicide run at the planet killer, attempting to destroy the device from within. 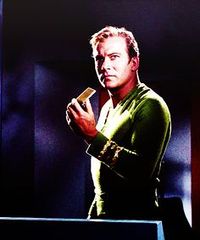 "Gentleman, I suggest you beam me aboard..."
WATCH HISTORIC FOOTAGE

While Decker's effort was unsuccessful in destroying the device outright, the Enterprise detected a drop in power output after the shuttle's explosion. Upon learning this, Kirk decided to try to destroy the planet killer from the inside as well but this time using the Constellation by detonating the ship's impulse engines. Scott rigged the engines to detonate after a 30-second delay, and Kirk launched his attack with the Enterprise planning to beam Kirk aboard within those thirty seconds. The famed Starfleet explorer nearly lost his life when the Enterprise's transporters malfunctioned, but thanks to the engineering skill of Scott, Kirk was safely beamed back at the last moment, and the Constellation exploded, destroying the internal components of the planet killer.

The disabled planet killer was left for many years floating dead in space, with the area restricted. Eventually, the device was towed to a secure location where scientists and engineers attempted to learn more about its construction and origin. However, even over a century later, little insight has been gained into who built the device and what war it was originally intended to fight. Kirk and his crew were recognized by Starfleet for their actions. For his efforts to save the Rigel system that ultimately cost his life, Commodore Decker was posthumously awarded the Medal of Honor.