An impromptu beachside brainstorming session provides the first glimmer of hope that the officers and crew of the Veritas may have a chance of returning home, but the odds are long and the margin for error is non-existent. The moon itself seems to resist their efforts as a titanic storm wracks the camp while a small team works against an impossible clock to restore the Veritas and free the crew before the ship plummets to a fiery end.

After discovering that time on the moon is flowing more quickly than it is for the outside universe, engineers Geoffrey Teller and Wil Ukinix, working with Captain Roshanara Rahman, Commander Evan Delano and stranded time traveler Jhalib Ekal, have devised a plan to transport a small repair team aboard the Veritas, moments after the crew was originally evacuated more than three months prior. This complex and dangerous plan will buy the team a few hours in which they can attempt to repair the sabotage to the Veritas, refuel it with whatever they can find on board, and neutralize the temporal anomaly which keeps the crew trapped outside of time on the moon below.

Elsewhere on the moon, newly promoted Lieutenant Junior Grade G'var leads a long-distance scouting team consisting of Ensign Wil Ukinix, Doctor Cole Maxwell, and observer Fleet Captain Aron Kells and on a perilous search for additional survivors deep within the jungles of Limbo. Called back to Camp Rahman, Fleet Captain Kells and his security escort leave the team dangerously undermanned when disaster strikes. The scouting team is attacked by a savage jungle predator and G'var is maimed while defending her team, but they successfully drive back the terrible beast and make contact with Captain Felecia Nickson's encampment, where Doctor Maxwell struggles to keep G'var alive as Captain Nickson obsesses about a supposed thief in their midst. Marshall Henning Hext and Lt. Cmdr. Alora DeVeau are relieved to discover much of the crew survived the evacuation and plans are made for the perilous overland journey back to Camp Rahman. 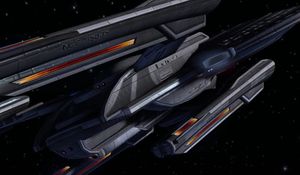 USS Veritas, powerless and in a decaying orbit above the moon Limbo

Transported through time and space, the repair team consisting of Fleet Captain Kells, Commanders Delano & Kelrod, Lt. Jg Teller, Ensign Kree'Ahk and Jhalib Ekal successfully return to the Veritas in time to see Fleet Captain Kells's vessel plummet to the moon below. Knowing they have only a few hours in which to pull off a miracle, they break up into small teams and begin the difficult journey through an abandoned, powerless ship.

Meanwhile back at Camp Rahman, a massive tropical typhoon has begun to lash the survivors with pelting rain and extreme winds, disrupting efforts to construct a device that will protect them from radiation if and when the team aboard the Veritas are successful in disrupting the temporal anomaly. Survival itself is uncertain as structures collapse and trees pin crewmembers inside an escape pod that's rapidly filling with rainwater.

In the jungle, the scouting team struggles across flooded ground and overturned trees while carrying their injured comrade back to Camp Rahman. Wary after losing one of their own to G'vars blade earlier, several vicious Mantilions attack the hobbled team and critically injure Captain Nickson before again fleeing into the cover of the jungle. Desperate and out of time, Doctor Maxwell has to work medical magic on the dying woman as the rain continues to churn the ground around them.

Back aboard the Veritas, time is nearly up as the ship hurtles towards the moon. Finally overcoming the last hurdles thrown in their way by the Temporal Integrity Commission, the Veritas unleashes a titanic blast of energy, dissipating the anomaly and returning the moon to its rightful place in time. The crippled ship limps into a stable orbit and begins to recover the most critically injured crewmen as dawn breaks on the one hundred and eightieth day of their perceived time on Limbo.