Between Esperance and Antor, the USS Veritas was sent to investigate a loss of communications with Yorba Station, a small refueling station. When Veritas arrived, the station was engulfed by a massive, roaming tetryon storm known as the Maelstrom. Unable to maneuver Veritas close enough to avoid damage to the ship, Captain Roshanara Rahman ordered two teams aboard the shuttles Miranda and Prospero to enter the Maelstrom in an attempt to locate the station. What they found was a fused mass of wreckage of the Tiburon, a class 2 freighter carrying industrial waste from Karakka. After encountering the Maelstrom, the freighter was disabled and later hurled into Yorba Station, destroying both.

Away teams from the shuttles boarded the wreckage at two entry points. One team located a single survivor from the Tiburon, a Valtese trader named Kallo Ver. The other recovered more evidence of what had happened, but was forced to abandon a search for more as the fused wreckage became increasingly unstable. Dr. Nikki Ryan was separated from her away team during a particularly violent shift of the wreckage, and was unable to be evacuated with the rest of her team. Evan Delano volunteered to stay behind to help her get to safety. Though successful, their transporter signal from the wreckage to their shuttle was interrupted by a massive surge of energy from the storm, apparently diverting their matter streams to another location.

Meanwhile, in an attempt to assist the away teams, Veritas found a way to enter the Maelstrom via a brief warp jump into a relatively calm section of the storm. The ship took minor damage from the action, but was able to get closer to the evacuating away teams. However, after exiting warp, they also discovered a lone rogue planet suspended in the Maelstrom. Despite having no sun, the planet appeared to be home to a post-industrial alien civilization.

While Veritas searched for their missing crew, Ryan and Delano were being pursued by unknown groups on the planet while being exposed to massive levels of theta radiation. Fleeing, the away team came on a group of aliens that were apparently planning to meet Ver to get off the planet. Together, they took shelter in a series of nearby mountain caves to wait for the hoped-for rescue. It arrived in the form of the Veritas SAR team. After some debate, Delano, Ryan, and the aliens that had helped them were rescued.

As the rescue was taking place, Veritas was making preparations to escape from the Maelstrom, which had closed around the ship, making escape difficult. Per a plan devised by chief engineer Luna Walker, creative use of the ship's quantum torpedoes cleared a path through the tetryon fields just enough for another warp jump to get the ship out of danger. Though the ship once again suffered damage, Veritas was able to restore systems and resume course for the Antor system. 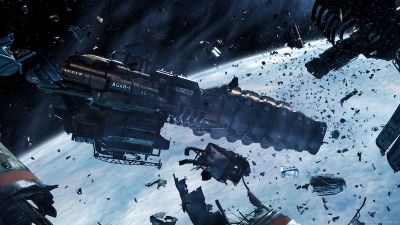