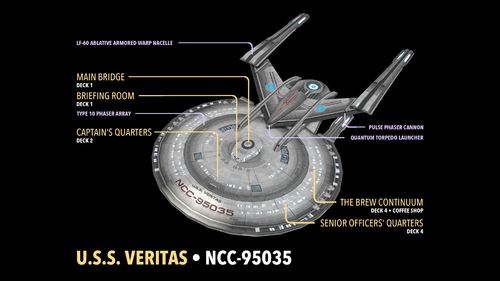 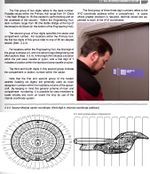 In the saucer section, sector numbers go from 01 to 36 and correspond to one of 36 ten-degree sectors that divide the saucer section. In the secondary hull, the sector number always starts with 5 and the second digit corresponds to one of five sectors (labeled 0-4). First sector digits of 6, 7, 8, and 9 correspond to the upper port, upper starboard, lower port, and lower starboard nacelles and pylons respectively.

As a Starfleet cruiser, the interior design of Veritas is more comfortable than its smaller Defiant class cousin but not as extravagant as larger explorers such as the Galaxy class and Sovereign class starships.

Though not as extravagant as the library on Cardiff or Galaxy class vessel-there is no wood paneling here covering the bulkheads for instance—the library aboard Veritas still offers a cozy sanctuary for book lovers. The ship’s librarian is Dr. Rosemary Shriver, a human woman in her mid-forties. She acquired from a bookshop on Esperance a rare hard copy of The Happy Return, the first of the Horatio Hornblower novels written by C. S. Forester. Alongside the novel is a traditionally crafted ship in a bottle. The ship in question is a detailed replica of the 36 gun frigate HMS Lydia. Both are proudly on display along the wall near the library’s modest reading area, along with the other few physical books and documents that are carefully placed behind a thin plate of transparent aluminum. One such physical artifact is a rare paper map of the Shoals from an early atlas of star charts, published before the Federation even existed. Early colonists and traders often kept a physical atlas as a back up to the virtual copies. Of course, in this day and age, these physical tokens are more ornamental. The vast majority of the library’s collection is found in the ship’s computer, and so the bulk of the library is devoted to terminals and alcoves for study.

Along the wall of the Chiefs Mess were photographs of past chiefs from previous tours of duty. A Federation flag was hung along another wall, alongside some other memorabilia. Interestingly enough, there was also a full set of Klingon body armor on display on a mannequin in the corner. A small dining table doubled as a poker table.