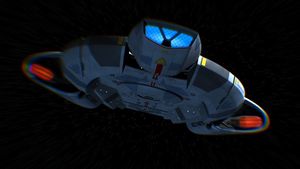 A small ship in a big universe: the Defiant class was always that. A small ship that packed one hell of a punch. And the latest addition to the fleet of Starbase 118 is no exception. The Defiant class USS Triumphant, NCC-75692 is small, white and dangerous. It has served in a variety of places over the years, from the Ithassa Region to the farthest corner of the Delta Quadrant. Several different crews have served aboard this storied starship, and each have left their mark on the galaxy as a whole.

The USS Trimphant is the thirty-third Defiant-class vessel constructed. It is a more-or-less standard Defiant-class vessel with three quantum torpedoes, one photon torpedo launcher, and four pulse phaser cannons, and two phaser emitters. The Triumphant has had a few minor modifications to make it compatible with deep space work. These include extra cabins, provisions for a counsellor, a small holosuite, and an officer's wardroom.

The USS Triumphant's first CO was Commander, then Captain Danson Mwangi. Initially the Triumphant was posted to Taskforce Gamma, the taskforce overseen by Admiral Hollis Calley. Their first action was in the T'lithian Wars and they took part in many of the group actions. When the Ithassa Taskforce was created, the Triumphant was absorbed into this new group. Mwangi captained the ship for eleven years until being transferred to the USS Tucson along with many of his crew.

The Triumphant was then turned over to newly-appointed Captain Rhys Bejain. At the end of Captain Rhys Bejain's tenure, the ship was used by the StarBase 118 Operations crew for area defense, before being assigned to Captain Malcolm Lysander for Trinity Sector escort, SAR, and police duty.

Later, in 2392, the Triumphant, now augmented by crew from the Federation Starship USS Darwin-A, joined the Darwin-A on a manhunt that led them to the Delta Quadrant. Her captain, Samal Frazier, was disabled by a disease shortly after taking command, and Commander Kael Thomas filled the gap. After the conclusion of the mission, the Triumphant was returned to Federation space.

The Triumphant is currently assigned to the Tyrellian Defence and Exploration Taskforce under the overall command of Rear Admiral Quinn Reynolds.