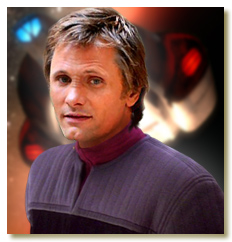 Commodore Rhys Bejain was most recently Commanding Officer of the USS Triumphant.

Rhys is from Kendra province on Bajor. Taken to a forced labour camp at 10, he was rescued by the resistance, and joined them at 14. It was at this time that he met Tara Nystrel, who, a few years later, became his lover.

After the Cardassian withdrawal, he searched to find his family. His father, Ramara Vid, a vintner, had been a colaborator, which pleased Bejain not. There was no sign of his mother or older brother, Catya.

Embittered, he joined the militia. He served for a while as a shuttle pilot, and as a security guard on DS9, and completed officer training at the Bajoran Military Academy. He was assigned as a lieutenant to a small Bajoran frigate before being transferred, largely against his will, to Starfleet. He completed an extra year at Starfleet Academy before joining the Kodiak.

Gradually, he rose through the ranks, moving from Chief of Security to Chief Tactical Officer, and to First Officer. During the course of a missions on the Kodiak, he encountered his brother, Rhys Catya, who confirmed that their mother, Ayisha, died on Terak Nor.

He's now a Captain, and CO of the Defiant-class USS Triumphant, having come a long way from a headstrong and bitter ensign. He's faced his demons of his hatred of Cardassians, his own nightmares, and has rediscovered love with Tara Nystrel.