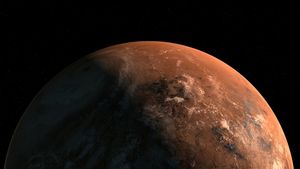 Delta Vega I from orbit

Delta Vega I is a crystal and mineral rich Class-L planet slightly smaller than Sol III and located in the region of space now classified as the Sagittarius Reach. It is located several days from the Galactic Barrier at impulse speed and was once the site of an automated lithium mining and cracking station owned by the Galactic Mining Corporation that was abandoned in the middle of the 23rd century. 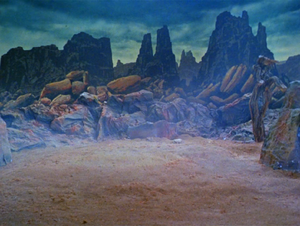 In 2265 it was the site of a confrontation between Captain James T. Kirk of the USS Enterprise and his helmsman Lieutenant Commander Gary Mitchell who had been ‘uplifted’ into omnipotence by the effects of the Barrier. Mitchell’s grave is located on this world and is closely monitored by the scientists of Dehner Base, a scientific institute established by the Federation Science Council upon the commencement of Starfleet’s exploration of the Sagittarius Reach in 2395. This base is named for Doctor Elizabeth Dehner, a psychologist aboard the Enterprise who lost her life in the confrontation with Mitchell.

Delta Vega I is the first and only planet orbiting a pair of white dwarf stars and possesses no natural satellites. The planet is rocky and mountainous with sparse outcroppings of vegetation and features no large bodies of water on the surface, although scans from orbit do point to the existence of large subterranean lakes. From orbit, the planet appears a ruddy brown and many species cannot survive on the surface without assistance. There are significant deposits of lithium, dilithium and other crucial materials used in the construction, maintenance of powering of starships. This makes Delta Vega strategically important in the Federation’s exploratory efforts within the Sagittarius Reach.

The planet is some distance from the furthest borders of Losarian space, at least by that species' standards.[1]