Yogan Yalu's personality is a complex amalgam of personalities–that of his former unjoined self, Yogan Verso; that of Yalu, the symbiont to which he is Joined; and those of the symbiont's previous hosts. Like all Joined Trill, Yogan underwent years of training to ensure that, once Joined, the symbiont would complement, not overwhelm his own personality.

Yogan is an innate idealist, and possesses a nearly inexhaustible optimism. His belief that all people are inherently good occasionally causes conflict in his professional life; he struggles to understand why good people suffer. He dislikes the constraint of arbitrary rules, and tends to support creative thinking and the rights of others to do as they please. He tends to give the benefit of the doubt whenever possible. Yogan struggles to accept challenges and criticisms as opportunities to better himself; rather, he can take them personally and become mired in self-doubt. Yogan wants to be liked, and avoids conflict if he can, preferring to adjust himself rather than risk confrontation with another person.

Since joining, Yogan's symbiont and former hosts have influenced his personality, creating a more extraverted, pragmatic, and social individual, but also one prone to impulsive decisions, cynicism, and a flair for the dramatic. He is proud to have been selected for joining, and he thinks often about how his memories and experiences will influence Yalu's future hosts. He also wonders whether he measures up to his predecessors.

Yalu is an enthusiastic fan of a particular genre of Betazoid literature, the psychodrama. He reads them voraciously and is always looking for a new one. Yalu also regularly updates his FedReads profile with the books he is currently reading, has recently completed, or wishes to read in the future:

Yalu is a symbiont–a sentient vermiform lifeform–who has lived symbiotically inside hosts of the humanoid Trill species. Yalu was born in the Caves of Mak'ala on the Trill homeworld in 2030, and was Joined to a host for the first time in 2140. The joining of Yalu to Yogan Verso in 2392 created a new, unique individual–Yogan Yalu. Yalu's eighth humanoid host, Yogan, carries the memories of Yalu's seven previous hosts, who include a subspace radio operator, a farmer and artisan weaver, a famous actress, and a member of the Trill Senate.

Yalu's Starfleet career began on Stardate 239307.01, when he entered Starfleet Medical Academy in San Francisco at the rank of Cadet 4th class. During his first year, he excelled in medical ethics, clinical fundamentals, and immunology, but struggled with genetics. Outside of his medical studies, he continued his flight training, earning high marks in starship navigation.

On Stardate 239407.01, Yalu began his second year of medical studies at the rank of Cadet 3rd class. During this year, he succeeded in the subjects of medical and life support systems and diagnosis, but had his biggest professional failures as well, earning a D+ in non-humanoid surgery, the lowest mark of his Academy career. He concluded his flight training during this year, receiving the equivalent of an undergraduate minor in navigation.

Yalu's final two years at Starfleet Academy were largely successful, although he continued to struggle in surgical classes. He graduated from the Academy on Stardate 239706.07, with a Level 5 pilot's qualification, an M.D., and a commission at the rank of Ensign.

Yalu graduated from Starfleet Academy in June and was posted to the USS Atlantis as a medical officer. Five weeks later, he was transferred to the USS Resolution–which was re-entering active service–as a helm officer. In July, Resolution encountered the derelict USS Unity, whose computer systems had been commandeered by a space-dwelling lifeform. In September, Resolution visited Da'al, a non-aligned planet in the Borderlands, where the crew was instrumental in preventing a coup d'état. In December, Resolution was searching for a missing freighter in the Celendi Nebula when they were transported more than 200,000 years into the future.

In 2397, Yalu was awarded four service ribbons. He was also promoted from Ensign to Lieutenant JG on Stardate 239712.08.

The year 2398 began with the USS Resolution still in the far future, attempting to rescue the crew of the freighter Andalucia from enslavement at the hands of the Sau. They succeeded in rescuing a large number of them, but Yalu was haunted by the fact that some were left behind. Upon their return to the present, Yalu began preparing to undertake zhian'tara, the Trill Rite of Closure, and invited several of his crewmates to participate in the ritual with him. In February, Resolution attempted to negotiate a peace agreement between the Nascaik and the Thama, who both claimed Vionus IV as part of their sovereign territory. After a terrorist attack nearly destroyed the ship, the crew successfully concluded the peace treaty between the surviving diplomatic representatives.

In April, Yalu returned to Trill with four of his crewmates, and completed his zhian'tara. The following month, when Resolution was sent into the Briar Patch to search for a missing Starfleet science ship, they crash landed on a planet inhabited by an advanced form of non-corporeal life, whose manipulation of energy caused a disruption in the relationship between Yogan (host) and Yalu (symbiont). The illness persisted for several months thereafter. In July, Yalu, along with the rest of Resolution's crew, was trapped in a time loop at the hands of a Q.

In September and October, while the USS Resolution was temporarily under the command of Genkos Adea, Yalu served as acting first officer.[16] 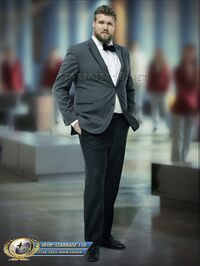