From 118Wiki
< Yogan Yalu
Jump to navigation Jump to search

This article documents the personal history of Yogan Yalu.

Baščaršija, Sarajevo, Yogan Verso's birthplace and home from 2362 to 2372

Yogan Yalu was born Yogan Verso in Sarajevo in 2362, the eldest child of Aydam Verso, an agriculture scientist, and Haned Jurea, an administrator in the Trill Diplomatic Corps. The young family lived in Baščaršija, the old town market sector of Sarajevo, and due to Haned's work with the Trill diplomatic mission on Earth, Aydam was the primary caregiving parent during Verso's young years. Verso was followed in 2365 by another son, Nedal, and in 2370 by a daughter, Kejana. Initially educated at home, he was sent to a local school starting in 2368, where he experienced the first joys and struggles of being the only Trill child in a community of mostly humans. At the local school, Verso was educated in both Federation Standard and the Serbian standardised variety of the Serbo-Croatian language, while his native Trill language was used within the home. These early years instilled in him a curiosity about others who were different than he, but also a sense of self-exceptionalism that would take years to grow out of.

In 2372, a Changeling infiltrator bombed a high-level Romulan–Federation conference in the city of Antwerp, which precipitated a coup d'état attempt against the democratically elected Earth and Federation governments. Although the coup attempt failed, Haned and Aydam decided that Earth was no longer a safe place to raise their young family, and they relocated back to the relative tranquility of the Trill homeworld that year. The family settled in Grodor, a provincial town on the foothills of Bes Manev, where Aydam taught agriculture science at the local technical institute. Haned continued working for the Diplomatic Corps, commuting regularly to the capital and often being away for extended periods. Ten-year-old Verso found it difficult to adjust from the excitement of living in a major urban center on an alien planet to the quiet, pastoral life on the outskirts of Grodor town. Living on Trill did, however, give him his first real introduction to the customs and history of his own people, particularly the practice of joining, which was not discussed openly during the family’s time on Earth. He became fascinated with Trill history and tradition, and with the help and encouragement of one of his secondary school teachers, herself a Joined Trill, he began considering applying to the Initiate Program when he came of age.

In 2373, eleven-year-old Verso visited the spaceport in Leran Manev on a school trip, and became enamoured of the idea of learning to fly. His parents arranged for him to take lessons in small craft navigation, and by the age of 13, he was able to pilot suborbital craft. He continued his flight training during his teenage years, eventually obtaining the equivalent to a Starfleet Level 3 pilot's certification in 2380.

As a student, Verso excelled in the natural sciences, including biology and physics, and possessed average capabilities in mathematics and languages. Although he enjoyed reading as a pastime, the humanities were not of great interest to him academically, in particular the visual arts. In 2381, he completed his compulsory education at the provincial school in Grodor, and was accepted into the University of Chi'tar to continue his education at the tertiary level. 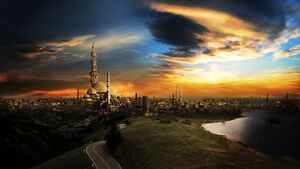 Chi'tar, where Yogan Verso attended University from 2381 to 2386

Due to his high aptitude scores in the sciences, Verso was encouraged to enroll in the premedical studies program at the University of Chi'tar, to prepare him for a career as a physician. He concurrently pursued a minor in astronavigation against the counsel of his university mentors and advisors. As his studies progressed, the diverging demands of both programs complicated his academic progress, ultimately delaying his graduation by a year.

In 2382, his mother took an early retirement from the Diplomatic Corps. Although the accepted reason was that she became frustrated with the lack of professional advancement–the most senior diplomatic posts in the Corps were unofficially off-limits to unjoined Trill–Haned's retirement also coincided with the beginnings of small-but-noticeable changes in her personality and behaviour. It would not become evident until many years later that Haned was suffering from an early-onset form of dementia, with which she would be formally diagnosed in 2392.

In 2385, as his university studies neared their end, Verso applied to be a candidate for Joining. The Symbiosis Commission's evaluation of his application coincided with sitting his university exit exams, and the two combined to produce the most stressful time of his life to that point. Despite the difficulty of this period, Verso completed his undergraduate education in 2386, graduating with a Bachelor of Medicine, Bachelor of Surgery (MBBS) and a minor in astronavigation. 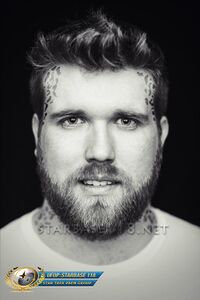 ID photo of Yogan Verso in 2390, from his Initiate file

Verso's plans to continue on to medical school after university were put on hold in 2386, when he was accepted into the Initiate Program and became a candidate for joining. Relocating to the Symbiosis Institute's compound in the Trill capital, his entire life changed virtually overnight. He adapted quickly to the rigours of the program at first, but as he learned more about the lifelong discipline and commitment required of Joined Trill, his doubts grew. In particular, he had reservations about the authoritative role the Commission played in the lives of Joined Trill, and feared that Joining would result in him losing himself.

A transformative moment occurred during his second year in the program, when he spent several weeks with a field docent, a Joined Trill assigned to mentor an Initiate, demonstrate what Joined life is like, and evaluate his suitability for continuation in the program. Verso's field docent, Onesa Javo, was an ascetic and survivalist who lived a simple, solitary life in the harsh environment of the Tenaran Ice Cliffs, and was unlike any Joined Trill je had ever met before. Javo took a special interest in him, giving him both an unvarnished view of the difficulties ahead as well as her unfailing support and encouragement that he possessed what it took to be Joined. It was because of Javo that Verso truly came to understand the host's role in elevating the symbiont to the next level.

With a positive evaluation from his field docent, Verso returned to the compound energized and inspired. Although his final two years as an Initiate challenged him, he persisted, and the Symbiosis Commission approved him for Joining in 2390. Because the number of potential hosts far exceeds the number of symbionts available, he was required to wait to be Joined. Eager not to put his life on hold any further, he applied for and was accepted into a one-year fellowship in critical care and emergency medicine at the university teaching hospital in New Scirapo. This experience reconnected him with his medical training and allowed him the opportunity to reintegrate back into the wider world after four isolating years as an Initiate.

In 2392, the respected politician Eira Yalu unexpectedly died while debating on the floor of the Trill Senate. That same day, the Symbiosis Commission notified Verso that he had been selected to become the next host to her symbiont, and would need to report to the Institute compound and be Joined immediately. After the procedure was complete, Yogan Yalu—tradition dictates that the symbiont's name replaces the host's family name after Joining—returned home to Grodor to recover and adjust to life as a Joined Trill. Returning to his family home after a decade revealed disturbing cracks in the seemingly happy Verso family story, and Yalu did not remain there for long. 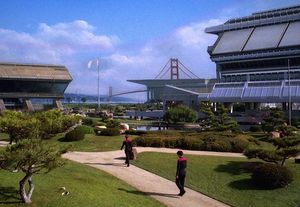 Starfleet Academy in San Francisco, where Yogan Yalu attended medical school from 2393 to 2397

The following year, Yalu began applying to medical schools to continue his studies. Although he received acceptance letters from several schools on Trill and other planets, he ultimately decided to attend Starfleet Medical Academy. He had not seriously considered a career in Starfleet previously; his choice was likely influenced by the memories of his sixth host Auzell, a dedicated Starfleet officer who had lost her life in the Dominion War. Attending Starfleet Academy would also reunite Yalu with Earth, the planet where he was born and lived until the age of ten. While excelling in such subjects as medical ethics, diagnosis, and critical care, he struggled with genetics and surgery, earning a "D-plus" in the latter during his second year. As he did during his undergraduate career, Yalu concurrently earned the credits equivalent to a minor in astronavigation while attending the Academy, and he graduated with an M.D. and a Level 5 pilot's certification in 2397.

In June 2397, Yalu completed his cadet cruise aboard the USS Centris-A, and later that month was posted to the USS Atlantis as a medical officer. His time aboard Atlantis was short-lived; in July, he was reassigned to the USS Resolution as a helm officer.

The Symbiosis Commission contacted Yalu in November 2397 to request his return to the Trill homeworld, so that he could complete zhian'tara, a ritual ceremony required of all Joined Trill. A Guardian, Rohjess Beem, followed up on this communication three months later with instructions, rather than a request, to report home for the ritual. Yalu successfully completed zhian'tara in April 2398.

In mid-2398, Yalu experienced an unexpected and life-threatening drop in isoboramine levels following an encounter with a species of energy-based lifeforms called the Skarn, who resided on an uncharted planet in the Briar Patch. Initially, routine isoboramine injections were sufficient to maintain a healthy neural connection between host and symbiont, but as the year progressed, their effectiveness decreased. The host's behavior became erratic as the balance with the symbiont was increasingly disrupted. Near the end of the year, Dr. Genkos Adea successfully cured Yalu's condition.