My hobby is collecting hobbies. I love talking about them so don't be afraid to ask. Everything from watch making to gunsmithing to writing. I was, in my previous life, an extreme sports athlete as well. GP and Superbike racing, competitive rock climbing, to big wave surfing. 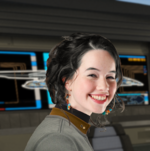 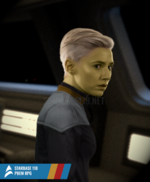 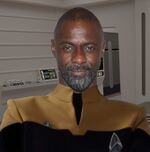 Note: Any current crew member is allowed to sim the following characters. 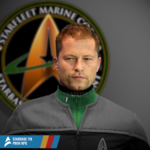 Raban, Suliban terrorist who participated in the attempted theft of an illegal Genesis device 2398. Mission: Cats Among The Pigeons

ULTIMATE ANTAGONIST! (Ok, maybe he's not such a bad guy, he's coming back)

Citation (2398): Since coming aboard out of the Academy, Sherlock has been willing to jump on in and participate in anything that any of us needed help with. From the wiki, to images, and just JPing and connecting with the rest of us, Sherlock’s contributions go a long way towards making the Resolution feel like home.

Citation (2398): By adding imagery to our wiki, offering image creation services to us and others, and by generally putting pictures to the things we write, Sherlock provides yet another layer of creativity and depth to what we do. While it may seem like these are another part of the process, they are very appreciated and definitely make what we write more real and enjoyable for all.

Citation (2399): Jared is always and forever adding special touches with his skills in rendering and photoshop. He's created visuals of numerous locations, such as the Resolution memorial, and the unforgettable face of Commodore Coffee, as well as 'class rings' for Academy graduates and a number of photoshop manipulations as requested by members of the fleet. Truly awesome work!

Citation (2398): Presented by Kalianna Nicholotti: There is a lot that goes into a good security officer. With plenty of on-screen examples, we have a pretty good idea of what it takes to serve in this role on a starship, but it takes a special writer to bring it all together. The recipient of this year’s Natasha Yar Pin, Jared - aka Lieutenant JG Aine Sherlock - does a fantastic job and exemplifies everything we look for. Strong, true, smart, and witty. The character Jared writes jumps off the page and fills the role so well I can't imagine the Resolution without her.

Citation (2399): During two of our missions, Aine was injured and simmed it well, both in the moment and throughout the recovery. First was in protecting her crewmates during a hostage situation on Rinascita station where she was shot in subduing a Suliban terrorist. With emergency surgery having to be done before getting back to a ship to stabilize her, she simmed the ensuing mental strife well. Then, on the next mission, she found herself concussed, and in a state of mental disarray...which was ultimately quite fun to read.

Citation (2399): Recognized with the Vega award on ship, Aine Sherlock’s contributions to the fleet at StarBase 118 go well beyond just their own ship. Jared, the writer behind Aine is a prolific contributor to the image collective, and specializes in not only character portraiture but more complicated designs such as 3-D models, blueprints for locations and odd jobs such as memorial plaques, coffee designs and in-world signage. This amazing graphics talent helps to being our setting alive and invigorates our wiki!

Aine’s skills are always growing and the player is not afraid to tackle challenges. Special thanks for all the hard work done on the 3-D models of Amity station as well as settings for the Excalibur-A and StarBase 118 Ops! It is commendable for a graphic artist to support their ship, but Aine goes above and beyond, supporting other ships and installations at a fleetwide level. Nominations from across the fleet recognized and thanked Jared for his willingness to work with others and incredible graphic skill.

A true graphics wizard, a wonderful fleet supporter and an amazing player, I am thrilled to present Aine Sherlock with this year’s Okuda Award! It is very well deserved! 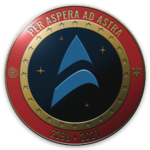 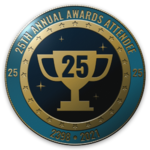 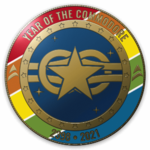 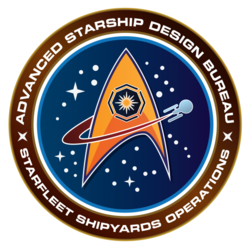