From 118Wiki
< Yogan Yalu
Jump to navigation Jump to search

This article documents the professional history of Yogan Yalu in the year 2397. 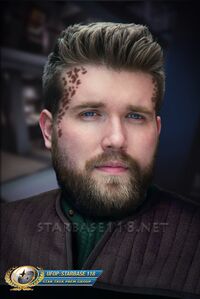 The newly commissioned Ensign Yalu joined the crew of the USS Atlantis mid-mission, during a Freeworlds trade conference on Illara Prime. Initially, he remained aboard the ship, working shifts in Sickbay, while several teams were sent to the planet to attend the conference. Eventually, Captain Jarred Thoran requested that Yalu join a team consisting of Ensign Ilana Ganarvuss, Ensign Lephi, and Marine Captain Kurt Logan, who were investigating the disappearance of the conference's Director of Security. Dr. Yalu hypothesized that the Director had been incapacitated and removed from the premises, and along with the other members of the team, theorized that the Naylari DNA present in the office may have been planted to interfere with the investigation. After a number of inexplicable utility failures, Yalu was paired with Illaran forensic pathologist Eisla Nidhar and tasked with acquiring the spaceport's records, in the hope that they might shed some light on the director's disappearance. While visiting the records office, Dr. Nidhar was attacked by an unknown assailant. Yalu treated Nidhar's injuries and secured her evacuation to a medical facility, then turned over the records to Lt. Cmdr. Serala before being recalled back to Atlantis. Despite the best efforts of the Atlantis crew, the trade conference was canceled after a number of violent attacks and acts of sabotage were carried out by a Valcarian spy.

Following the cancellation of the trade conference, Atlantis remained in orbit around Illara Prime for several days of shore leave. During this time, Yogan beamed down to the planet to visit Dr. Eisla Nidhar, who was recovering in hospital following her attack, before spending a half-day as a tourist on Illara Prime. Back on Atlantis, Yogan conducted the onboarding medical exams of several new crewmembers, among them Ensigns Ilana Ganarvuss and Lephi. Barely one week into shore leave, Yogan received orders to report to Starbase 118 at once, as he was being transferred to a newly-recommissioned ship, the USS Resolution. After a few days to pack and tie up loose ends on Atlantis, he caught a shuttle from Illara Prime to Cestus III, where he boarded the USS Majestic bound for Starbase 118.

Yalu arrived at Starbase 118 on stardate 239707.21 and shortly thereafter reported for duty aboard the Nova-class USS Resolution. Transferring from the medical division to the command division in the process, Yalu was assigned the duty post of helm officer as a result of his piloting and astronavigation qualifications. Resolution departed Starbase 118 for The Borderlands, a relatively uncharted region straddling Federation and Klingon space. En route, the crew of Resolution discovered a derelict Federation starship, the USS Unity, which had been reported lost with all hands in 2347. Yalu, Commander Adriana Morgan, and Ensign Aeson Del transported to Unity's officers' lounge to investigate a series of visual phenomena that Ensign Del had reported seeing. While there, an alien entity inhabiting Unity sent a single-word message to the away team: exterminate.

Recalled to Resolution, Yalu maneuvered the ship out of harm's way during a brief firefight with Unity, but doing so left several officers–Morgan, Lieutenant Commander Addison MacKenzie, Lieutenants junior grade Jamie MacNemar and Kudon, and Ensign T'Suran–trapped on the derelict ship. Ensign Del hypothesized that the entity had interfaced with Unity's computer, and Yalu worked with Del and the bridge crew to establish communications with the alien and bring the away team safely home. The crew discovered that the entity living within Unity was a silicon-based lifeform whose natural habitat was similar to that of the nearby Celendi Nebula. Yalu and Lt. Commander Raimy Ambarsan collaborated to disable Unity without alerting the entity, so that it could be safely towed. Meanwhile, a team of officers succeeded in gaining the entity's trust, ensuring that Unity could be safely moved, first to the nebula, and from thence to Starbase 118.

Resolution returned to Starbase 118 with Unity in tow, and after the crew held an awards ceremony in a holographic recreation of San Francisco, they dispersed for shore leave. The leave was short-lived, however; almost immediately, the crew were recalled to Resolution and told to prepare for an immediate departure on an urgent mission.

Having been recalled to Resolution, the crew immediately departed Starbase 118 for Da'al, a planet in the Borderlands inhabited by a non-violent, warp capable race of the same name. Despite achieving warp drive just over 100 years ago, the Da'al expressed little interest in joining the galactic community, preferring to keep to themselves and their small, but growing network of colonies. Both the Federation and the Klingons had attempted over the decades to establish relations with the Da'al, but were rebuffed each time. For this reason, it came as a surprise when Starfleet received an urgent plea for assistance from an officer in the Da'al military, claiming an incipient Klingon invasion and subsequent occupation. Resolution, despite possessing neither significant diplomatic nor military capabilities, was sent to investigate and help keep the peace.

Resolution was met in orbit of Da'al by a Klingon ship, Targ. Diplomatic overtures were made with the captain, while a series of away teams transported down to the planet and, without warning, a second Klingon ship decloaked and fired on Resolution. With the political situation on the planet unraveling, Fleet Captain Kalianna Nicholotti ordered Yalu to land the ship just outside the government complex in the capital city. Nicholotti took an away team to Targ, while Lieutenant Commander Addison MacKenzie led a separate team to the government complex, leaving Lieutenant Commander Genkos Adea in command on the bridge, with Yalu and Lieutenant David Knight.

With Resolution stationery on the surface, Yalu monitored the planet's communications networks. He and the other bridge officers watched the prime minister attempt to overthrow his own government, and almost as quickly, be rejected by the people in peaceful mass demonstrations. In orbit, the second Klingon ship self-destructed, but not before Targ's captain, Kris, had captured one of its crew, a Da'al mercenary. Fleet Captain Nicholotti, successfully negotiated for the prisoner to be released into her custody, and from there, turned over to the Da'al authorities. With a provisional government in place and the former prime minister under arrest, the Federation offered its support and friendship, while the Klingons determined that the planet and its people were not suitable for incorporation into the Empire.

With the Da'al situation back in the control of the indigenous government, Resolution departed the region and returned to Deep Space 224 for shore leave and crew rotation. While en route, Yalu received a message from the Trill Symbiosis Commission, informing him that the time had come for him to undertake the zhian'tara, the Trill rite of closure. This news preoccupied him somewhat throughout the shore leave. Upon their arrival at DS224, Yalu was invited to participate in an evaluation/play-through of one of Lieutenant JG Gnaxac's holodeck adventures, along with Ensigns Meidra Sirin and Jana Zicv. At first, Yalu accessed the program's narrative parameters to add unexpected elements, but eventually completed the program successfully with the help of his fellow players. Also while on DS224, Yalu had lunch with Lieutenant Commander Addison MacKenzie, during which they discussed their backgrounds and Yogan discussed his feelings regarding the upcoming zhian'tara.

On the final night of shore leave, the entire crew gathered on DS224's observation deck for a formal banquet. For his exemplary service during the previous mission, Yalu was awarded the Captain's Commendation, and later in the evening, was promoted to the rank of Lieutenant junior grade.

The morning after the awards ceremony, the crew of the USS Resolution were recalled to their ship and ordered to depart Deep Space 224 immediately for the Celendi Nebula. The freighter Andalucia was on a trade mission, carrying terraforming equipment to a client on the far side of the nebula, when it was reported missing. On the bridge, Yalu used the ship's navigational sensors to extrapolate the probable course Andalucia took. He and Lieutenant Commander Addison MacKenzie surmised that Andalucia attempted to cut through the nebula to save time. The likely course passed dangerously close to a gravimetric distortion deep within the nebula. Yalu worked with Lieutenant Commander Devon Romjin, Lieutenant David Knight, Lieutenant junior grade Jamie MacNemar, and Lieutenant junior grade Melody Delri'ise to enhance the sensors with a network of probes deployed in a hexagonal pattern about the ship.

Upon Resolution's arrival at the nebula's borders, Yalu used the probe network to pilot the ship through the nebula's volatile gases. He maintained a safe distance from the gravitational anomaly, but its gravity unexpectedly increased and pulled the ship through. The ship transited the anomaly with minor damage, although all of the probes were lost. Surprisingly, the nebula had vanished and in its place was a star system with several planets. Yalu used the ship's stellar cartography database to find known stars as reference points, and discovered that the entire galaxy had rotated one-tenth of one degree. Based on this information, Yalu roughly estimated that Resolution had traveled 200,000 to 300,000 years into the future.

Almost immediately, the crew encountered the Sau, a lizard-like race with little interest in friendly first contact. The bridge crew found wreckage that matched Andalucia and lifesigns of familiar Alpha Quadrant species on one of the planets, and Fleet Captain Kalianna Nicholotti ordered an away team to locate the missing freighter crew. MacKenzie, Lieutenant Commander Genkos Adea, Lieutenant Commander Tai Ilsam, Ensign Aine Sherlock, and Ensign Callium Treetus beamed down to the planet while Yalu and the bridge crew evaded the Sau and took refuge inside an asteroid belt. While the bridge crew worked to avoid an open confrontation with the Sau, Nicholotti fell ill and command passed to Chief Science Officer Lieutenant Commander Iefyr Farrel.