Lieutenant Commander Anath G'Renn, MD (Federation Basic: [‘ənaθ g’ʔɹɛn], Klingon: [‘anatɬ’ħ ɣ’ʔrɛn]) is currently serving as the chief medical officer aboard the USS Chin'toka. She graduated from the Academy and was posted to the USS Blackwell as a medical officer on Stardate 239402.28. She is a Klingon/Vulcan hybrid from the planet Vulcan and was born on Stardate 236810.28. She is married to Savok and is a member of the House of Qu'Voq.

Anath G’Renn is the middle child of Lyras and T’Shol G’Renn. Lyras is a geneticist and a neuroscience expert for the Vulcan Biology Institute. Her parents, T'Sil and Valsur, had two other children. Lyras' sister T'lain is a member of the Vulcan government. T'lain is married and has one son. Lyras' brother Strennel is a Starfleet science officer working in research and development. She attended the Vulcan Science Academy and hoped that her children would follow in her footsteps as scientists.

T’Shol, Son of Rartoll is a former field medic for the Klingon Defense Force and a member of the House of Qu'Voq. He is Rartoll and Rhila's second child, after his older brother O'Trel. A disguised anti-personnel mine exploded, requiring that his left leg be amputated. He was subsequently drummed out of the KDF and left to find a new career. With the limited positions for a doctor in Klingon society, T'Shol immigrated to the Federation and took up residence on Earth for several years. During this time he Federationized his name. For a last name, T'Shol adopted the name of his grandmother Colonel G'Renn to honor her. This last name would also be passed on to his children.

T'Shol G'Renn and Lyras first met during a biochemistry symposium hosted by the Vulcan Biology Institute, and the unusual sight of a Klingon dedicated to medicine was intriguing to Lyras. The couple married several years later. The couple's first child, Anath's sister Jolash, was born three years into their marriage. Anath was born two years later and their brother Avarak four years after that. The family has a home in T'Paal City on Vulcan, where Lyras works. T'Shol G'Renn moved to Vulcan and took up work as a civilian family medicine doctor working on Vulcan.

Anath attended the public schools in T'Paal City along with her siblings, and has very fond memories of her earliest years. She enjoyed listening to her father's stories about his struggle for acceptance in the Klingon military as a medic, exploring the area around her home, caring for two pet sehlats, and playing chess. During these early years her closest friends were a human girl named Alexa Kennedy, her siblings Jolash and Avarak, and Savok. Alexa Kennedy brought Anath out of the Vulcan shell she had been adopting and helped lead Anath in to all manners of trouble. Both of the girls were almost removed from the Syrran Learning Center for their disruptive behavior. 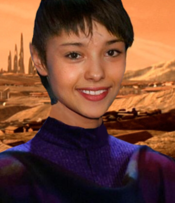 Anath G'Renn as a child.

The G'Renn household was at times chaotic and divided among "Vulcans" and "Klingons". Anath's older sister Jolash took after T'Shol and exhibited many Klingon characteristics. Meanwhile Anath had become a vegetarian and often emulated her mother's mannerisms. These conflicting character traits would often lead to arguments between the sisters. Angry arguments and sparring matches were common. Avarak was a happy medium between the two and was Anath's favorite sibling.

December of 2380, the G'Renn family took a trip to Terra Nova and explored the once-desolate human colony world. During the fourth day of their trip, Avarak fell ill with an unknown infection and was rushed to a medical center. He died a few days later, with his siblings and parents separated from him by a containment force field. This incident left Anath especially upset, living in her room and rarely emerging or interacting with her family members for almost two months. Her brother's death was the initial catalyst for her considering a career in medicine. She never wanted to see anything like what befell Avarak happen again. Anath focused more and more on her academics after her brother's death, hoping to apply for and be accepted into Starfleet Academy to become a doctor and help those in need.

The years after Avarak's death were marked by a substantial increase in Anath's focus on her academic career. She selected more challenging classes and worked with other students like Savok in areas of study she struggled with. Once she completed her preliminary education, Anath applied to Starfleet Academy and was accepted along with Alexa Kennedy. Months earlier she had learned of the marriage that her mother had arranged between her and Savok. Anath felt conflicted over her lack of choice in the matter and left the matter unresolved before departing for Earth.

At Starfleet Academy Anath was relieved to learn that her roommate was Alexa Kennedy, who helped her adjust to life on Earth. Alexa Kennedy also introduced her to some human culture, specifically baseball. She took a strong liking to the sport and became a big fan of the game. However, not all of her Academy experiences were as cheerful. Her Klingon temper made some enemies, and her unique physiology made typical emotional repression techniques for Vulcans ineffective. Despite the struggle of maintaining composure, she passed her exams and received an undergraduate degree in xenology with a minor in psychology.

Medical school was a much better experience for Anath. She specialized in pediatric medicine and performed very well in her classes. During her spare time she helped found a recreational baseball team with several other students. Several negative experiences with Professor Roger Thorston at the beginning of her senior year led to mandatory counseling sessions. Despite that setback, she graduated with a cumulative GPA of 3.85 and received her doctorate of medicine.

After completing medical school Anath was sent to Starbase 118 for her cadet cruise. She passed with flying colors and, after a farewell to her family, left for the Par'tha Expanse the next day to report to her first assignment.

Upon arrival aboard the USS Blackwell, Anath began serving as a medical officer alongside Jora Kalis and under the authority of the ship's chief medical officer, Graeme Cook. She was present for the emergency triage and subsequent disaster relief efforts on Kiros, helped cure a plague on Debin VII, and helped evacuate Deck 11 of the Blackwell along with Krindo Pandorn and Kalara Avran during the ship's encounter with a Taventa Robotics minefield. During this time she made connections among the crew of the task force including Jarred Thoran, Morin, and Ferentis. Anath was also promoted to Lieutenant (Junior Grade) following the events of the mission on Debin VII.

Anath's transition into a leadership role in sickbay began when the Blackwell encountered a telepathic virus. With Doctor Cook gone and current chief medical officer Isabel Pond unavailable, Anath became the ranking medical officer in charge of sickbay until being incapacitated by the virus. She would later make a full recovery and was promoted to Lieutenant and chief medical officer of the Blackwell during the departure of Captain Zaekia and Theo Whittaker taking command. Anath was present on Arndall to witness the return of the Hur'Q and invented the sonic weapon that drove them back underground. She was on the away team sent back in time on P-409 Sigma and was involved in the evacuation and eventual destruction of the Columbia-class Forthwith. She was also reunited with childhood friend and betrothed Savok, who arrived on board as a civil in researcher on assignment from the Vulcan Science Academy in May of 2395. 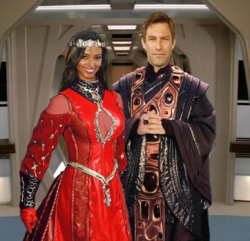 Anath and Savok at their wedding aboard the USS Columbia.

When the crew of the Blackwell was transferred to the USS Columbia Anath was made the ship's chief medical officer. She led her first away team during the search for Captain Whittaker. In late 2395, Anath was promoted to Lieutenant Commander and it was announced that she had also been made the ship's new second officer with the departure of Randal Shayne leaving the post vacant. She served aboard the Columbia as chief medical officer for the entirety of Theo Whittaker's tenure as captain of the ship and was joined on the ship by her betrothed Savok. The two of them were married aboard the Columbia on Stardate 239609.07.

During her time as chief medical officer and second officer, Anath further developed her skills in sickbay leadership. She developed friendships with many longtime sickbay staff members and worked with several new medical officers who arrived on the Columbia including Saden Lor and Nali Talia. Anath also continued studying the telepathic virus the USS Blackwell discovered as a personal research project. She also played a supporting role in the battle with and hunt for Tarius Kaironn. A later incident saw Anath as acting captain of the Columbia during an emergency in Captain Whittaker's absence. Anath was also taken prisoner, seriously wounded, and briefly presumed dead during her tenure as the CMO of the Columbia.

Transfers and Return to the Par'tha Expanse

The mission of the USS Columbia was cut short a month after Anath and Savok's wedding and the ship was recalled by Starfleet Command in October of 2396. Initially, Anath was transferred to the USS Astraeus as their chief medical officer. This assignment would prove to be very short-lived. She served on the Astraeus for less than a month before that ship's mission was also cut short and she was sent into administrative limbo once again. While frustrated by the repeated reassignments across the Alpha Quadrant, Anath's second reassignment brought her back to the same place her Starfleet career began. Anath was made the new chief medical officer of the USS Atlantis under the command of her good friend Jarred Thoran.

She arrived aboard the ship in the aftermath of Deep Space 26's arrival in the Paldor system. Anath also encountered another familiar face from the Andaris Task Force and began settling in to her new post. Savok, as with the move to the Astraeus, accompanied her to the new ship and continues his work as a civilian researcher in the Par'tha Expanse. This was Anath's new normal for several months until she and Savok took long overdue personal leave to return home to Vulcan. Their visit was interrupted on Stardate 239708.05 by the news that Jolash G'Renn and her husband had disappeared, along with the transport ship, the Star Lily, that they were travelling on. Anath's visit home of a few weeks extended into months as she eagerly waited for any news on the search. Starfleet eventually discontinued the search and declared that the ship was destroyed by a warp core breach. Anath and Savok became the guardians of Anath's nephew, Rol'Q. This was quickly followed by a request that Anath return to Starfleet service as the chief medical officer of the USS Chin'toka.