From 118Wiki
< Anath G'Renn
Jump to navigation Jump to search

Savok of Vulcan (Federation Basic: [sævɔk]) is currently serving as a civilian life sciences researcher aboard the USS Constitution-B. He previously served at the Vulcan Science Academy as a researcher, with a specialty in botany. He is a Vulcan from the planet Vulcan and was born on Stardate 236805.02. He is married to Anath G'Renn and is a member of the House of Qu'Voq by marriage.

Savok is the oldest child of V'Len and Serrol. V'Len was not expected to enter the field of science by her family. Her father was a monk and her mother had previously served in the Vulcan government. She and her siblings spent their childhoods studying the ancient ways of Vulcans and exploring the ancient sites on the planet Vulcan. However, V'Len chose to apply to the Vulcan Science Academy and studied biology. V'Len showed an aptitude for the study of genetics and joined the Vulcan Biology Institute after graduating. She worked closely on multiple projects with her colleague Lyras after arriving at the T'Paal City office of the Vulcan Biology Institute.

Serrol, unlike his wife, came from a family of scientists and academics. He grew up in Kir and grasped complicated logic problems very quickly, even by Vulcan standards. Serrol attended the Vulcan Science Academy and earned a doctorate in statistics. He spent two years working with the Vulcan Expeditionary Group before returning to Vulcan and accepting a job in Vulcana Regar. Serrol and a pregnant V'Len moved to Vulcana Regar, where Savok was born. The family would move again three years later to T'Paal City when the Vulcan Biology Institute closed their campus in Vulcana Regar.

Serrol and V'Len had been betrothed as children by their parents. They married upon reaching adulthood and completing their studies in 2362. Savok was born six years later on Stardate 236805.02. His younger sister T'pril was born almost ten years later in January of 2378. V'Len currently works at the Vulcan Biology Institute with Lyras and Serrol is a curator of the T'Paal City Library. The family currently resides just outside of T'Paal City, a short distance away from the home of the G'Renn family.

A young Savok on Vulcan.

Savok was born in Vulcana Regar, where his father consulted on statistical analysis of trade convoys and his mother worked as a geneticist for the Vulcan Biology Institute. He and his parents lived there for three years. When V'Len's place of work was relocated to T'Paal City, the family moved there together. Savok had a fairly standard Vulcan upbringing until he was enrolled at the Syrran Learning Center during the Dominion War. This transfer to a new school is where he met close friend Alexa Kennedy and future wife Anath G'Renn.

Savok was introduced to Alexa Kennedy and the G'Renn family through his mother's colleague Lyras. The mix of Human and half-Klingon children quickly accepted him into their social circle and would frequently involve him in their antics. He would often serve as a voice of reason against more impulsive decisions. Those friendships also exposed Savok to several unconventional pastimes like sand dune sledding that most Vulcan children did not partake in. During this time, Savok became closest with Alexa Kennedy and Anath, while also developing friendships with Anath's siblings. Anath would often accompany Savok to many art museum exhibits, sharing a passion for art that the other members of their social group did not find very interesting. Unbeknownst to Anath, Lyras and V'Len believed that their children were a good fit together and arranged for Savok and Anath to be married in the Vulcan tradition.

Starting in 2381, following the death of Avarak G'Renn, that Savok assisted Anath G'Renn in selecting the right courses and preparing academically for medical school. Savok helped his friend prepare for her future academic career while continuing his own studies. He showed a strong aptitude for life sciences, and was especially fascinated by botany. V'Len and Savok would often tour some of Vulcan's most famous botanical gardens, and Savok was allowed to attend introductory public lectures held at the Vulcan Science Academy. Savok also assisted in the upbringing of his young sister T'Pril, born in 2378. He instructed her in primary logic and unknowingly inspired her music career by giving her a lyre as a birthday present, inspired by the Human gift-giving customs he had learned from Alexa.

Both Anath G'Renn and Alexa Kennedy were accepted into Starfleet Academy and left Vulcan in 2386. Anath was infuriated by her mother arranging her marriage without her knowledge and left the question of their relationship unresolved before departing Vulcan for Earth. Meanwhile, Savok had applied to the Science Academy and was quickly accepted given his exceptional test scores.

Education at the Vulcan Science Academy

Savok was a student at the Vulcan Science Academy from 2385 to 2390. Through accelerated coursework, he earned a Master of Science degree in that time, majoring in botany. During his latter years as a student, Savok was mentored by Dr. Dyroc, one of the senior professors in the biology department. His insightful nature and clinical efficiency in conducting scientific experiments impressed Dyroc, and Savok was offered a position as part of the VSA Life Sciences Research Team due to an unexpected resignation. Savok accepted the position immediately after graduating.

As part of the Life Sciences Research Team, Savok worked closely with other biologists in different fields on large, collaborative research projects. Savok also developed casual friendships with other faculty members outside of his department, including T'Lak in the Astrophysics department and Stevinn, a clinical psychologist. Living in ShirKahr also presented opportunities to explore the ancient Vulcan city during downtime. Savok and T'Lak would frequently explore the Artisan Quarter of the city and visit the shops and art exhibits that were located throughout the city. These trips reignited Savok's interested in art and inspired him to study art history and various painting techniques. During his free time, Savok would visit the workshops of Vulcan painters and be tutored in their style. Vulcan impressionist painter Sefor in particular took a liking to the botanist and agreed to teach him different painting styles.

Savok and Ule Varr during an expedition to the Janitza Mountains.

In early 2393, Savok was selected to be a member of a survey of the Janitza Mountains on Bajor conducted in collaboration with the University of Bajor. He accepted the offer partly at T'Pril's insistence. His sister demanded that he take plenty of holophotos of the natural Bajoran wilderness when she was not allowed to accompany him on the expedition. Savok indexed many new plant variants during the expedition. He also assisted in tagging herds of rastipods to track the population and collecting rock samples from the higher peaks of the Janitza Mountains. Savok collaborated frequently with professor Ule Varr during the expedition. Varr encouraged him to pursue working in the field and the two corresponded regularly.

Savok's return to the main campus in ShirKahr began with the news that a teaching position was available. Dyroc pressured Savok into taking the post, making him an Instructor of Introductory Botany and Ecology. Savok was assigned to Classroom E-24 and began teaching two sections of Introductory Botany and three sections of Ecology. His class schedule would grow during his time as a teacher and he would be named a professor in November of 2394.

In 2395, Savok applied for an exchange program with Starfleet, which would place Vulcan Science Academy faculty members on Starfleet ships on the frontier to assist with research and exploration. As part of the program, Savok was assigned to the USS Blackwell and arrived in the Par'tha Expanse on Stardate 239505.14. Unbeknownst to him, the Blackwell was also the ship where Lieutenant Anath G'Renn was serving as chief medical officer. 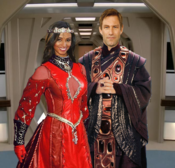 Savok and Anath G'Renn at their wedding aboard the USS Columbia.

Savok served as a civilian botanist on the USS Blackwell from his arrival in mid 2395 to the crew's transfer to the Columbia in 2396. He rarely became involved in the missions of the ship, instead focusing his efforts to the study of plant life in the Par'tha Expanse during his duty shifts and improving his skills as a painter off-duty. During their time on the Blackwell, Savok and Anath avoided the topic of their betrothal and remained good friends even after years of limited contact. Both realized dormant feelings for each other and, shortly before the transfer to the Columbia, Anath asked Savok if he would like to go through with their arrangement to be married and he accepted.

When the Blackwell's crew moved to the USS Columbia for a new mission, Savok followed to the new ship. Aboard the Columbia, Savok took a more active role in the social life of the ship. He made several friends among the science and medical departments, including chief science officer Pholin Duyzer. His tenure on the Columbia was very eventful, including Savok's first visit to a non-Federation world during shore leave on Losaria, hosting chess tournaments, and briefly believing that Anath had been killed during an away mission. On Stardate 239609.07, he and Anath G'Renn were married aboard the Columbia. The ceremony was held in The Look Outt lounge on Deck 10 of the ship and was officiated by Captain Theo Whittaker as was Starfleet tradition.

Following the decommissioning of the Columbia, Savok followed his wife's various Starfleet transfer orders. The couple briefly arrived aboard the USS Astraeus where Anath was supposed to take over as chief medical officer. That assignment lasted just over a month before the ship's crew was reassigned, leaving Anath and Savok again on the move. Anath's next transfer led them back to the Par'tha Expanse on the USS Atlantis now under the command of Jarred Thoran. Savok has resumed his duties as a life sciences researcher, although he seeks to find new ways to get involved and help the crew of the ship after the murder of fellow civilian scientist Stevok of Vulcan while providing medical aid during an away mission.

During a trip back to Vulcan with Anath in August of 2397, the couple became guardians for Anath's nephew Rol'Q following the disappearance of his parents. He feels that Anath is in denial that her sister and brother-in-law are truly missing and likely dead. While he still respects her demand that Rol'Q not be told what has happened to his parents, Savok continues to recommend that they tell him sooner rather than later. When Anath returned to Starfleet service at the end of October, the Atlantis crew had moved to the USS Chin'toka and Jarred Thoran died. Savok resumed his post as civilian researcher on a new ship under a new captain and assisted in taking care of Rol'Q. When Anath moved to Starfleet Medical Academy he transferred his VSA research exchange to Cambridge University. Anath left for the USS Constitution-B on stardate 239806.16. Savok and Rol'Q were supposed to follow a few months later, but a series of logistical problems and family emergencies delayed their departure for almost a year until April of 2399.